Congratulations to all pupils who participated in this year’s Junior Physics Challenge, with RGS achieving excellent results of 10 Gold, 21 Silver and 92 Bronze Awards.

The Junior Physics Challenge competition is organised by the British Physics Olympiad and is designed to engage and challenge pupils of all abilities by offering them a range of Physics problems to solve based on an assortment of topics from Dynamics, Electricity, Optics, Heat, Units, small amounts of Astronomy to Waves. Although most of the questions are based around the current GCSE curriculum, pupils will be able to gain more marks if they have a general knowledge in Physics and take a keen interest in practical work in lessons. The key aim is that pupils enjoy taking part, engage in the subject and are encouraged to do more Physics!

The competition is aimed at Year Ten pupils, but due to the internal Examinations at the end of May, we asked Year Nine pupils to join those Year Ten pupils available and they also performed superbly, despite the competition being targeted at a year ahead and results included three pupils from Year Nine achieving the Gold Award.

We look forward to awarding the certificates and well done to everyone. 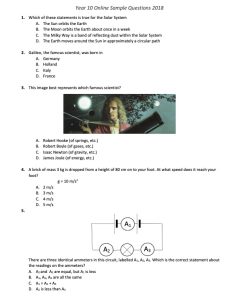 *Why not try out your own Physics knowledge with these sample questions: