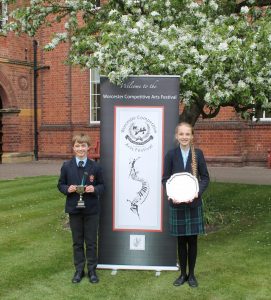 2021 was the 70th Anniversary for the annual Worcester Competitive Arts Festival and in this celebratory year, the event was held virtually. The festival celebrates performance in its many forms: poetry, drama, choral, singing, speech, music, aiming to give amateur musicians and actors in Worcestershire and beyond, an opportunity to demonstrate skills in a friendly and supportive environment. In previous years, RGS Worcester has always been pleased to host the event in school.

Distinction in Class 39 (16 and under Duet class) – Distinction, Gold Award

Well done to all those who entered. Enjoy selected performances from the 2021 Worcester Competitive Arts Virtual Festival here.

June Concert Series – RGS filled with the Sound of Music