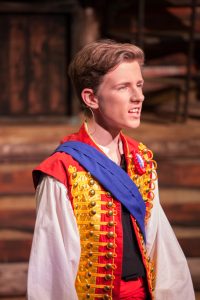 RGS pupil Ben Sears, Year Eleven, joins the small number of students nationwide, to have been selected to receive a Rank Foundation Leadership Award. The Rank Foundation is a charitable trust and selection for Scholarships is based on Headteacher recommendations, which identify pupils who show leadership potential when entering the Sixth Form.

RGS Worcester Headmaster, John Pitt commented, “This is a highly prestigious award and Ben should be congratulated since the Rank Foundation has clearly recognised his leadership potential. He is a very talented young man and I know he will go on to achieve great things in the Sixth Form. I had absolutely no hesitation in recommending Ben to the Rank Foundation and am delighted that he has received this accolade.”

Award holders attend leadership training and spend two weeks working for a not-for-profit organisation, typically a Youth and Community group or charity. These placements prove to be remarkable experiences and have been greatly enjoyed by previous Award holders from RGS in the past. Placements also provide insight into contrasting aspects of community activity, initiative and support, often in areas of deprivation.

Once Award holders have completed their time at school, they are invited to join the Fellowship – an alumni organisation for Leadership Award holders and invited guests whose representatives are based all around the world, creating unique networking opportunities. Well done to Ben – this is a superb achievement and he follows in the footsteps of other impressive RGS Rank Foundation Award holders.