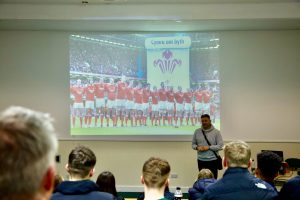 Pupils participating in the Athlete Development Programme (ADP), along with our keen Rugby players, had the opportunity to hear from former Welsh International Rugby player Rhys Thomas this week in a lunchtime lecture organised by the ADP team.

Rhys spoke candidly to the audience about his career highlights and also personal challenges he has faced in his life.

Originally from South Africa, Rhys moved to Wales in his late teens, with the ambition to become a professional Rugby player. His dream was soon fulfilled when Rhys was selected to play for the Under 19 and then Under 21 Welsh team, playing a big part in Wales winning the Under 21 Six Nations tournament. In 2004, Rhys made his senior debut for the Welsh national team, earning 7 International Caps for Wales between 2006 and 2009. In 2004, Rhys joined the Newport Gwent Dragons, helping the team reach the semi-finals of the European Challenge Cup in 2006 and then, in 2009, Rhys signed for the Scarlets.

Rhys explained how his professional achievements became overshadowed by his chaotic lifestyle off the pitch and how his Rugby career was cut short by a life changing injury, ultimately leading him to suffer a heart attack during training at the age of just 29. After a quadruple bypass and multiple operations, Rhys was eventually fitted with a LVAD heart pump to keep his heart running, leaving Rhys unable to continue his Rugby career or play any Sport at all. 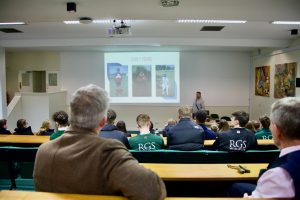 Rhys spoke poignantly of how, despite such devastating events and the loss of his career and identity, he has been able to overcome his battles with mental health issues and addiction. His purpose now focuses on sharing his story with others and working with organisations such as Sporting Chance to engage with schools, business and local authorities to “make positive lasting change in our community”. Throughout the talk, the entire lecture theatre was absorbed by Rhys’s words and the honesty with which he spoke.

Head of the Athlete Development Programme, Miss Sally Walton, said : “Rhys’s story is very different to most elite athletes and has given our pupils and indeed us all, much to think about, particularly to consider how we make best use of the talents and opportunities we are given.”

Rhys said: “I’d like to thank RGS Worcester for inviting me to talk to their wonderful staff and students today. Thanks for your wonderful hospitality and making me feel very welcome. I’m glad you enjoyed the talk and took something away from it!”

Rhys’s emotional story continues and faces further challenges as he now awaits a heart transplant. Drawing on his own experiences, he continues his work raising awareness around mental health issues and offers mentoring and work on confidence building and healthy routines to athletes and professionals. 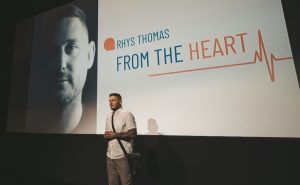 Find out more about Rhys here.