A Greek Party in the Performing Arts Centre

Euripides’ Greek Tragedy, ‘The Bacchae’, has taken to the stage here this week at RGS Worcester, although a little less risqué than the original. This adaptation of the text by Kneehigh Theatre Company, sees a modern reworking of this tragic tale, where King Pentheus of Thebes has outlawed all forms of revelry, only to go head-to-head with Demi-God, Dionysus. Dionysus gathers a number of followers referred to as ‘The Bacchae’ who want to party, but Dionysus also has other motives…

This Summer Production stars pupils from Years Eight and Nine as cast and crew, and has been directed by Mr Morgan, ably assisted by Lower Sixth Drama students. This is Mr Morgan’s final show here at RGS Worcester before moving on to lead his own Drama department in Somerset. Mr Morgan, said: “It was only fitting that for my final show here at RGS, I direct a play which is not only a little different to what I usually direct, but also one by my favourite Kneehigh Theatre Company.”

The Cornwall-based Kneehigh, celebrated their 40th birthday during the pandemic, before disbanding in 2021. Mr Morgan added: “It’s the end of an era for British theatre. Kneehigh is a company which we have explored a lot at GCSE, and continue to explore at A Level, and is the main reason for our annual A Level residential to Cornwall. Everything they do has a sense of playful anarchy which brings joy to the audience, which is showcased brilliantly in this RGS production of ‘The Bacchae’.”

Lower Sixth Assistant Directors, commented: “We have had the pleasure of working alongside Mr Morgan to direct this year’s summer production of ‘The Bacchae’, gaining new skills and working with younger RGS pupils. During rehearsals, everyone was so enthusiastic and energetic, which is a credit to Mr Morgan. The experience has been one to remember and we hope everyone enjoys the show as much as we have loved creating it! Thank you, Mr Morgan, for giving us this opportunity to work with you one last time at RGS Worcester.”

Mr Morgan concluded: “The cast and crew of ‘The Bacchae’ have worked tirelessly for this production; learning lines and attending rehearsals, alongside balancing their Academic work and Examinations. It has been a pleasure to welcome audiences this week and share this spirited production.”

The final performance of ‘The Bacchae’ can be seen today, Friday 24 June at 6.30pm in the School’s Godfrey Brown Theatre in the Performing Arts Centre.

If you were not able to see the show, please do enjoy the below show review of ‘The Bacchae’ written by Head of English, Mr Nicholas Phillips:

When ‘90s icon and Oasis frontman Liam Gallagher belted out the lines ‘I’m feeling supersonic / Give me gin and tonic’ on the band’s 1994 debut album, he was (although probably not aware of it at the time) giving expression to an idea that the Greek dramatist Euripides had explored in his play The Bacchae in 405 BCE. This is the human desire to be thrilled, to seek out excitement and ecstasy. Euripides’ play is also about the limits of these urges and what happens when the pursuit of pleasure threatens to bring with it disruption and disorder. This is one of the reasons the latest RGS Summer production transferred Euripides’ tragic masterpiece to the world of 90s Cool Britannia, Girl Power, Brit-Pop and rave culture. It was a very enjoyable and wildly exhilarating performance and bore all the hallmarks of Mr Morgan’s productions of the past: it was playful, irreverent, imaginative thought-provoking and at times gloriously chaotic (but we all know that true theatrical anarchy is carefully choreographed and designed). This was a wonderful way for Mr Morgan to end his time at RGS and, for me, it was one of the best Summer productions he has directed, and there are many notable examples from which to choose.

On arriving at the PAC, the audience were greeted with a sight I have not witnessed since I danced all night in a large field just outside Cardiff circa 1994. Over the stage swarmed a hedonistic horde of raucous and maniacal dancers all adorned in tie-dye t-shirts and acid house logos. These are the Bacchae, devotees of Dionysus, god of wine, theatre and sensual abandonment. Throughout the night they kept up their frenzied bacchanal/rave accompanied by some banging tunes (I believe this is the phrase) and some energetic and accomplished physical theatre. In contrast, we had the uptight and repressed King Pentheus, who is determined to dishonour the god to whom he is related and to deny every impulse and pleasurable instinct. This battle between the forces of conservative rationality and riotous excess drives the play to its dreadful conclusion and the cast handled the complex, multi-faceted narrative very skilfully.

This was a performance packed with humour, fun and moments of riotous excess (the sight of the Headmaster performing the Macarena was itself alone worth the price of a ticket). Most of all though, it was the cast’s ability, in the second half particularly, to capture the gravity and power of Greek tragedy. The final scenes containing the sparagmos (ritual dismemberment) and ensuing horrified realisation were performed powerfully with a chilling sense of pathos and anguished suffering. Sasha Penlington was particularly compelling as Agave in these final, terrible moments. All great performances of tragedy must leave the audience feeling horrified and helpless as they witness a spectacle they know must grind to its gory and inevitable conclusion. The cast achieved this superbly.

Throughout, there were assured and enjoyable performances. Finlay Breese was excellent as the bureaucratic fun-sponge Pentheus; Cerys Hickman captured the pent-up frustration and longing of Pam very well and Kieran Lilley and Thomas Pound formed an excellent double act as Cadmus and Teiresias. The supporting ensemble playing the followers of Dionysus were superb; all were full of energy and dynamism. As the play developed, they became more and more frenzied and menacing. Lexie Hubbard and Hope Bradley were superb as Corypheaus and led the group with charisma and comic aplomb. Their rapping was excellent and was topped only by the evening’s musical highlight ‘It’s a Bad Idea to Put a God in Jail’. Mention must also go to Jessie Dancox and Zac Johnson who were really impressive as Dionysus. They were chilling at the climax of the play as they gazed on remorselessly while Agave suffered. The Bacchae is a strange, disturbing and alien play in many respects; for such young actors to cope with its many registers and navigate between its tragic power and (in this version) comic anarchy was very impressive indeed. The crew put together an imaginative set and the quality of costume and design was striking. The interweaving of music throughout the play was adept and always purposeful: it enhanced the cultural connections between Euripides’ drama and 90s pop culture, which could otherwise have been merely gimmicky. This achieved some poignant inter-textual connections that added to the play’s pathos. Trying to identify the songs and cultural references was also great fun. Mr Morgan was ably assisted by Assistant Directors from the Sixth Form – Lizzie Adams, George Jasper, Luke Melaard, Olivia Neale and Lucy Smith – all of whom contributed significantly to the play’s success during rehearsals and by passing on their experience and knowledge to younger performers.

Enormous thanks must go to the cast and crew for a great night, but most of all to Mr Morgan. He has given us some memorable and hugely entertaining performances over the years – Flash, Animal Farm, Charlie and the Chocolate Factory, Alice in Wonderland, A Midsummer Night’s Dream at Witley Court, the list goes on. All very different, all quirky and engaging, all well-conceived; all full of energy, skill and imaginative dramaturgy. He has seen through the ranks a superb generation of RGS actors, allowing them to flourish, grow and mature under his expert guidance. We wish him all the very best and will miss him enormously. 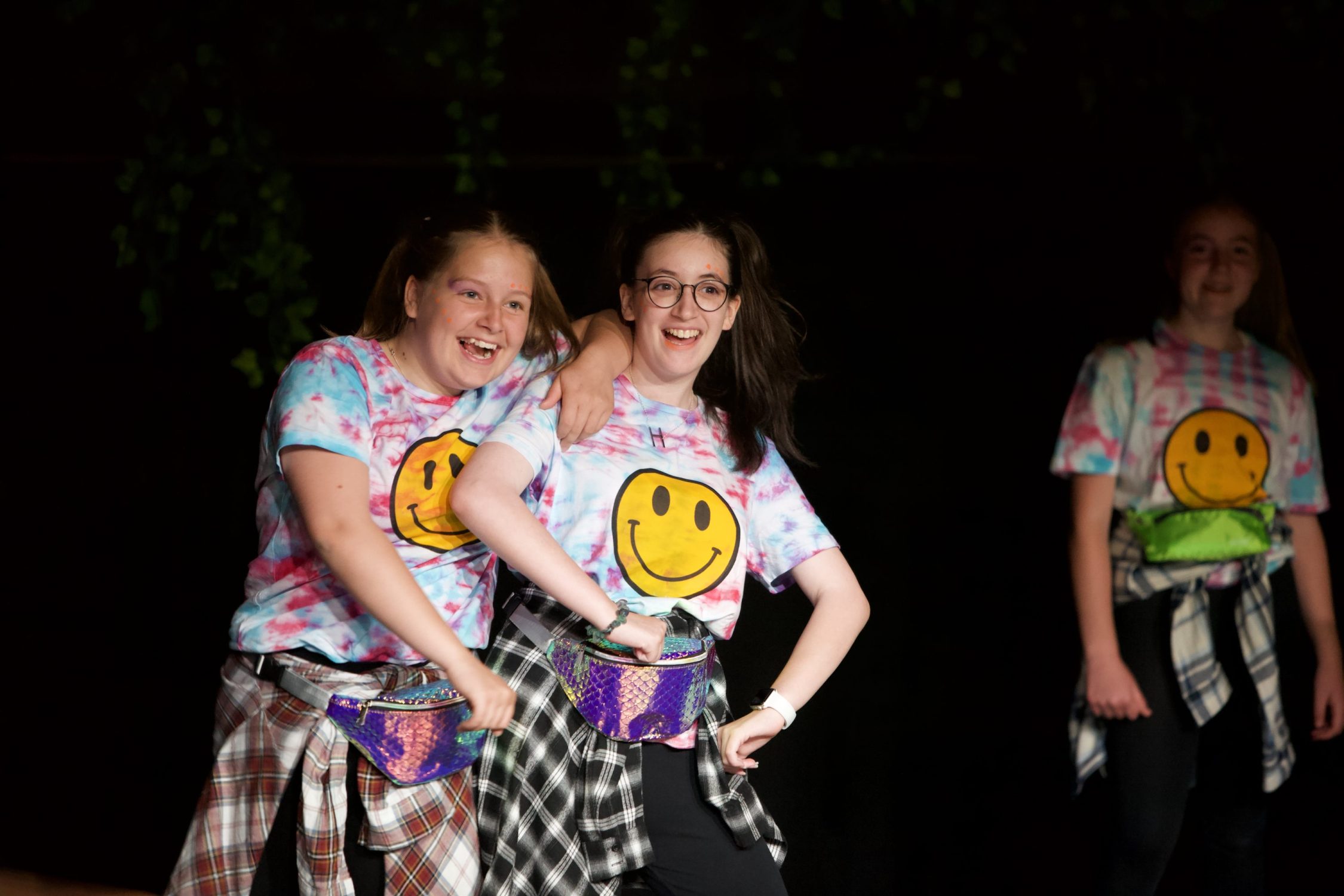 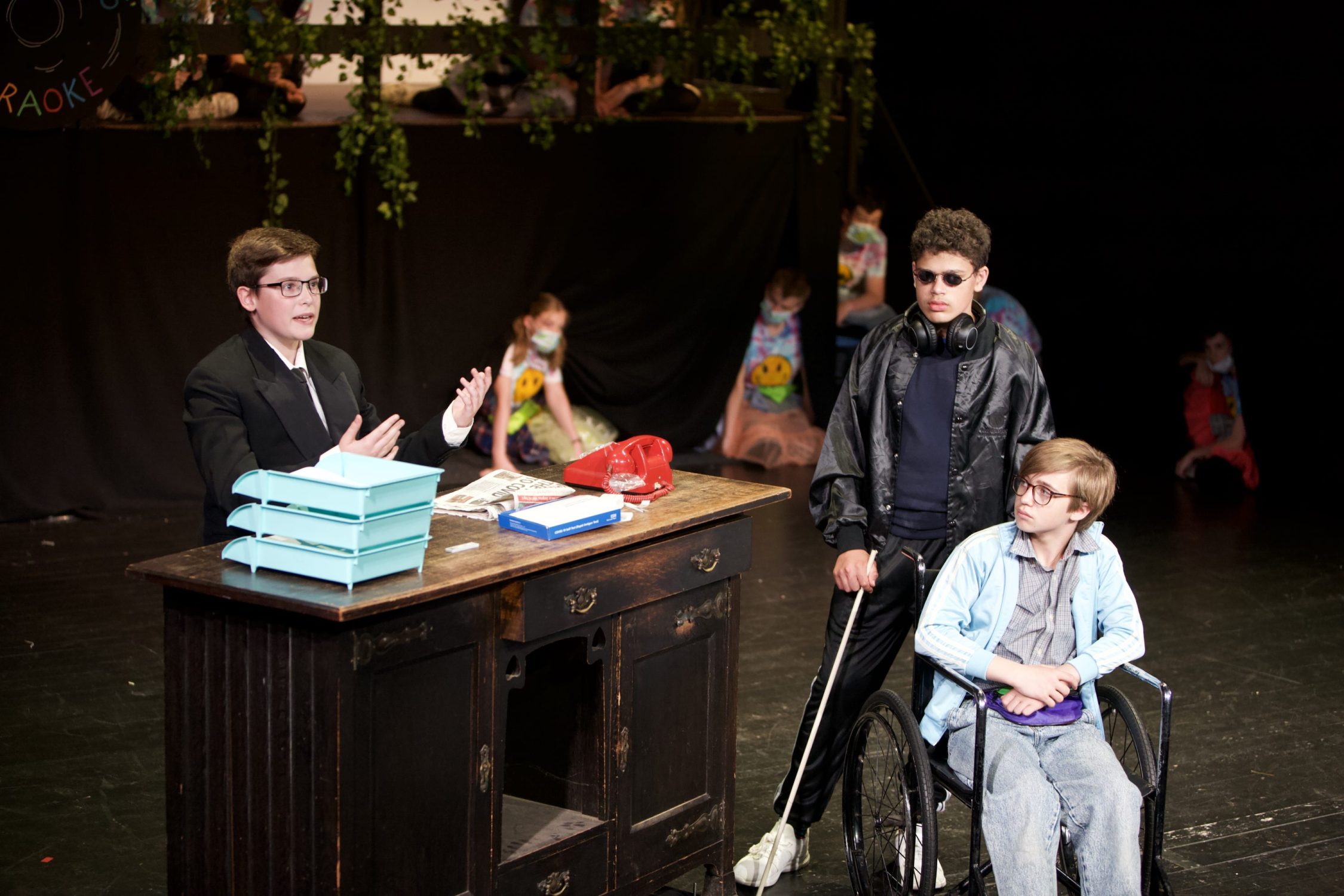 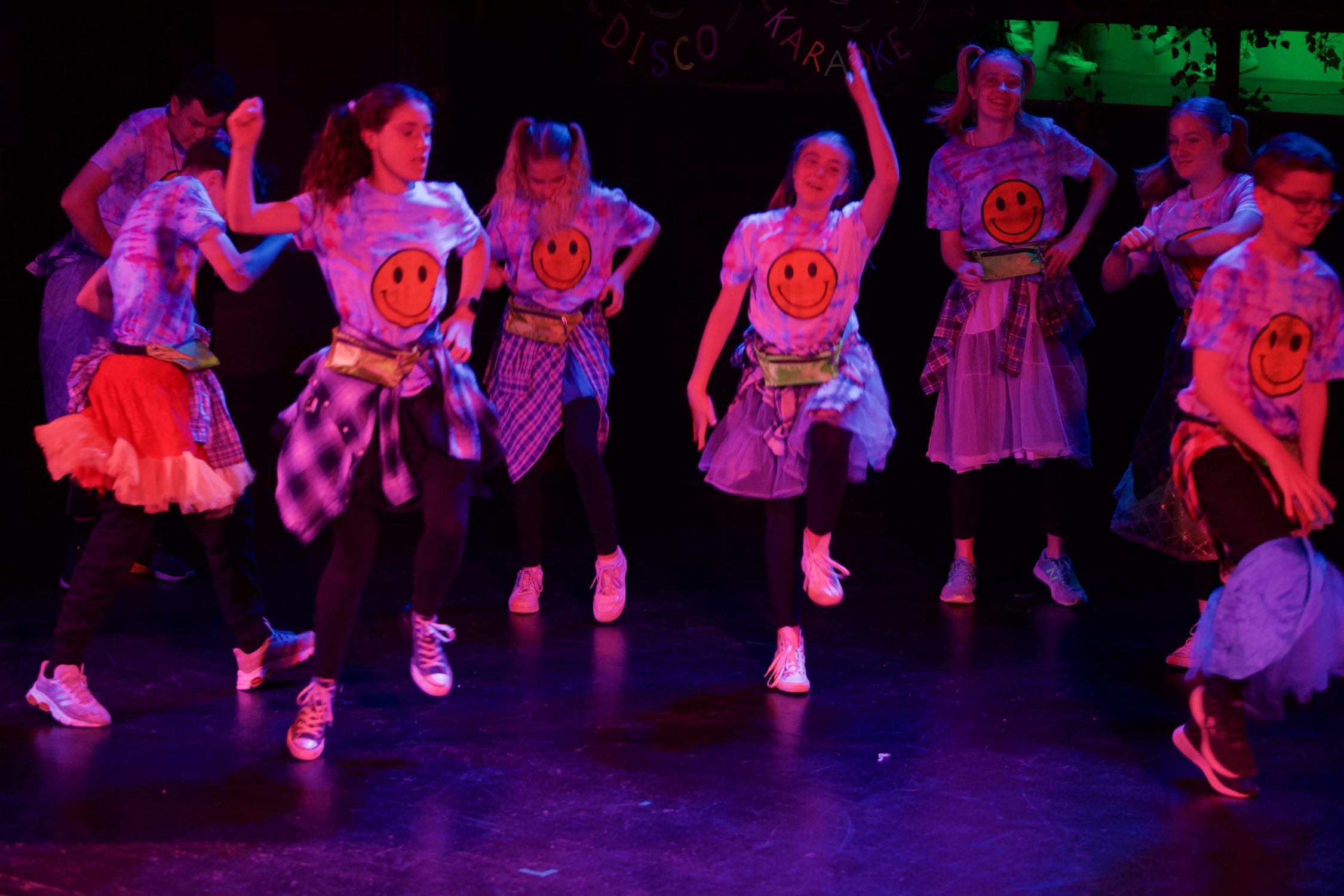 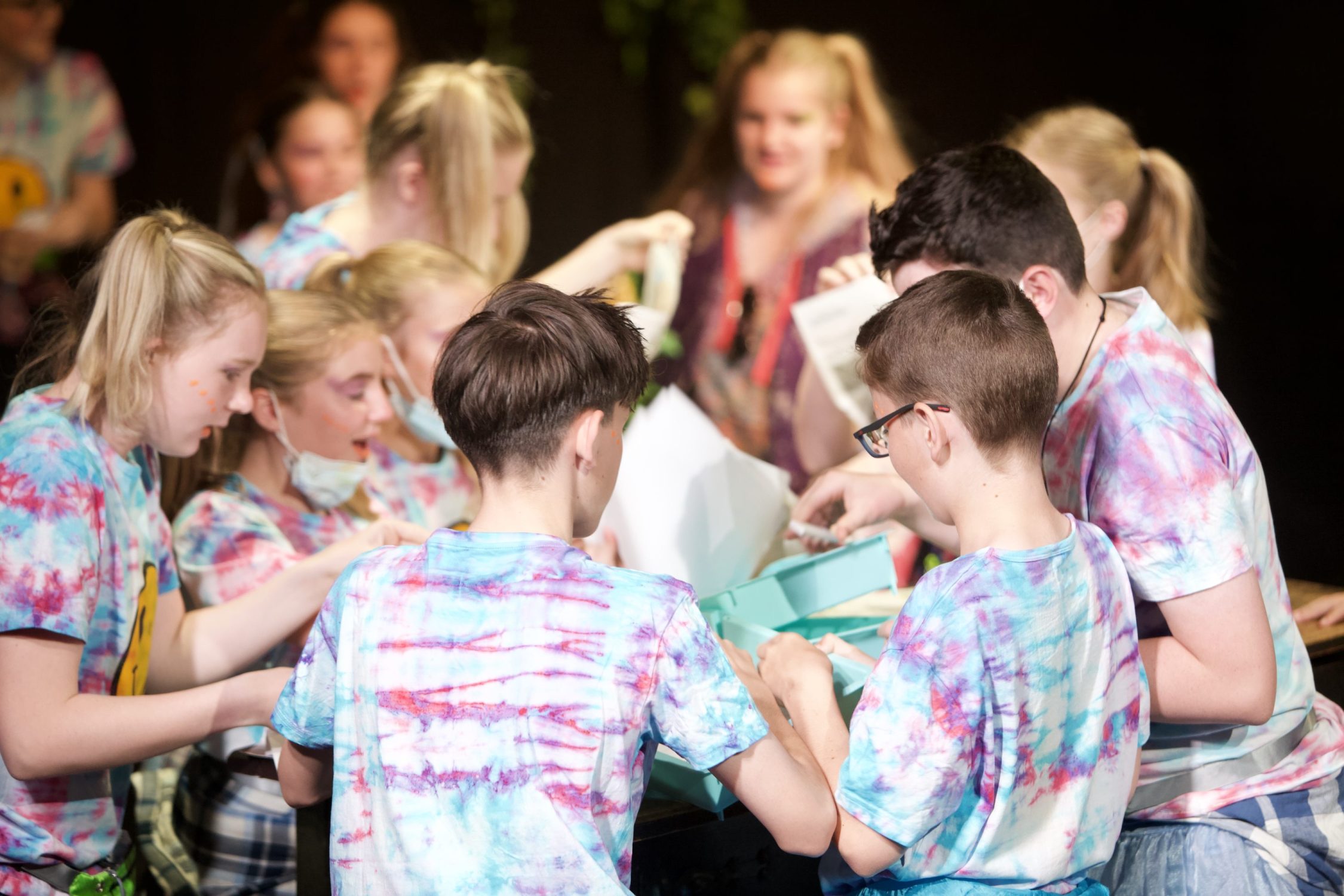 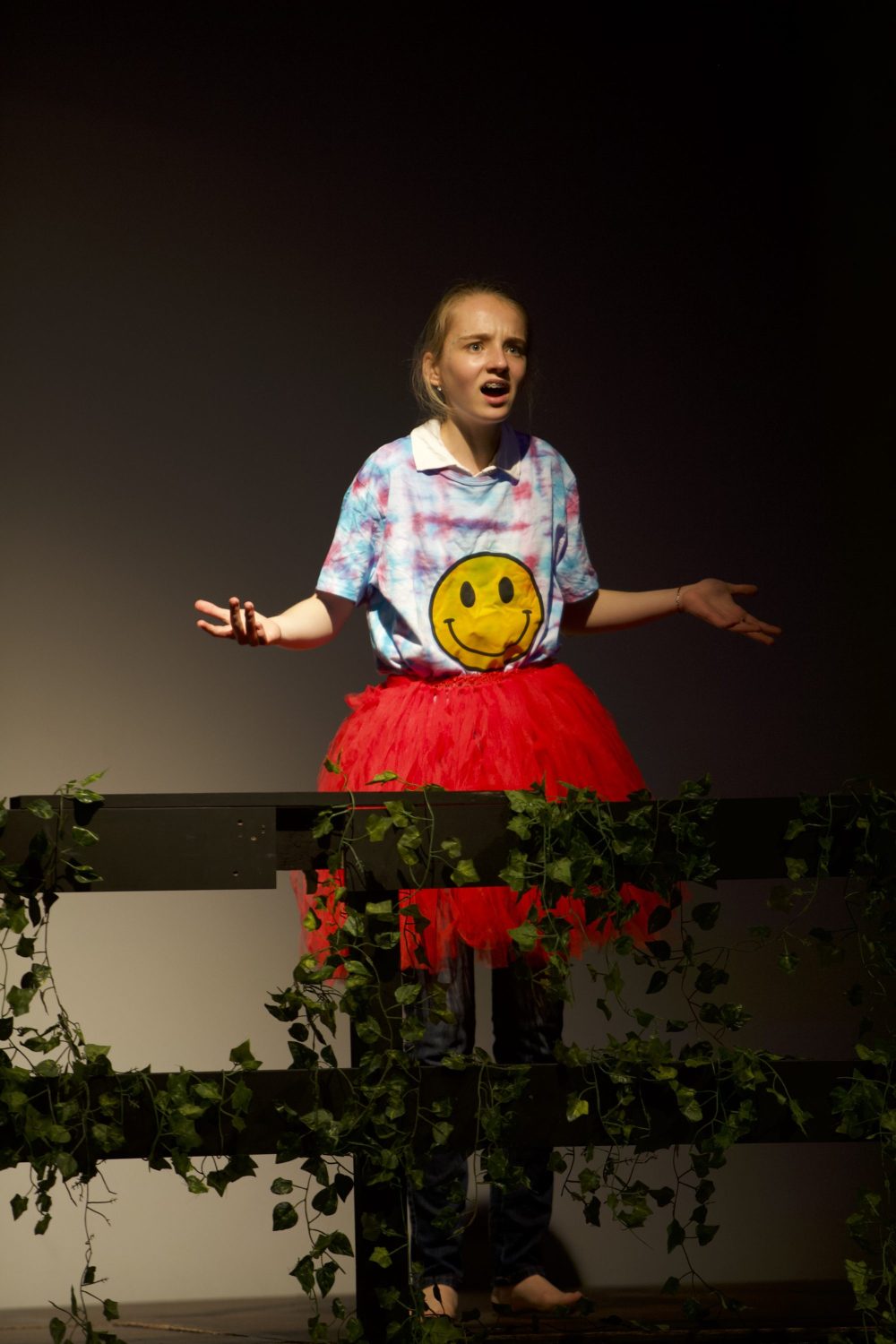 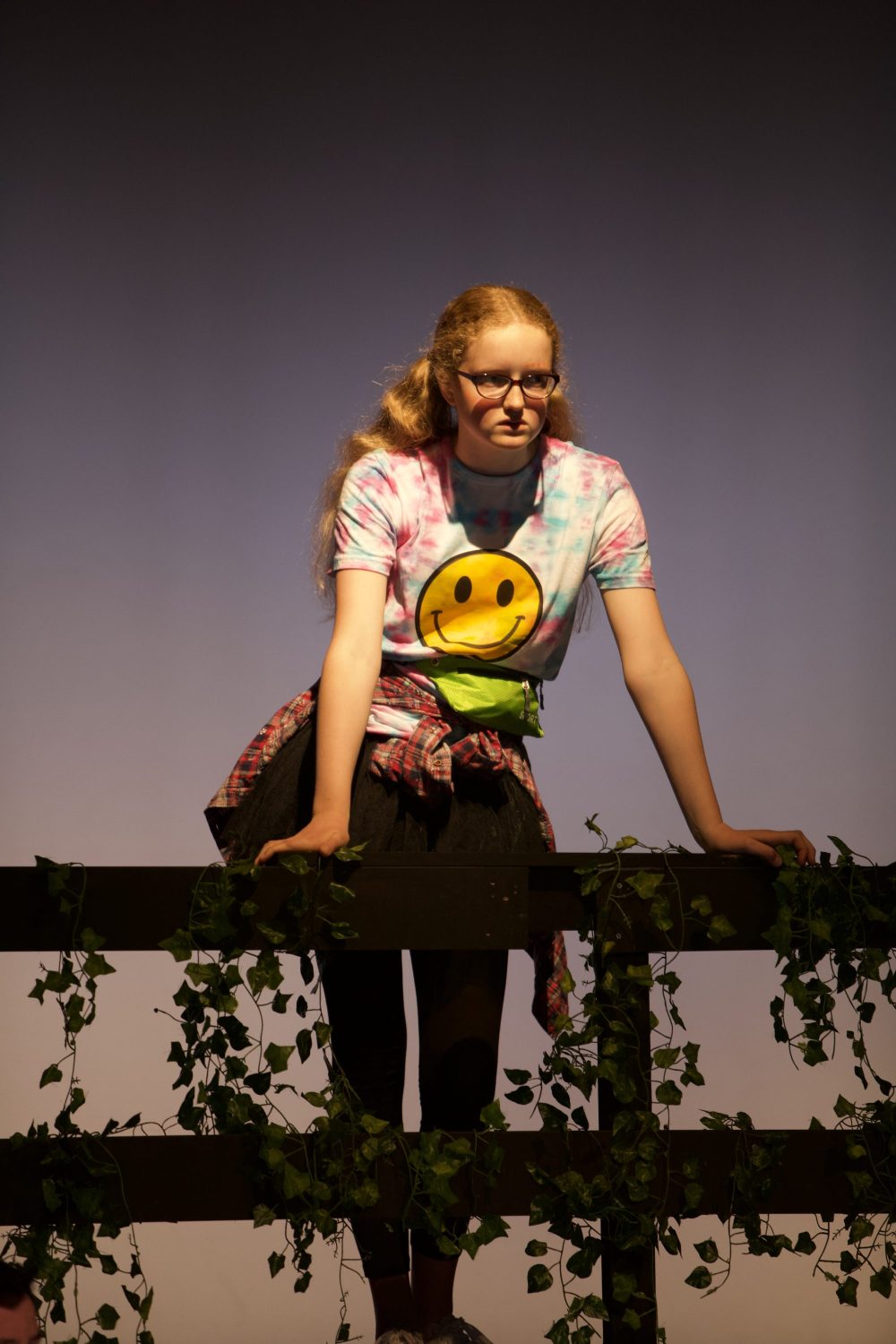 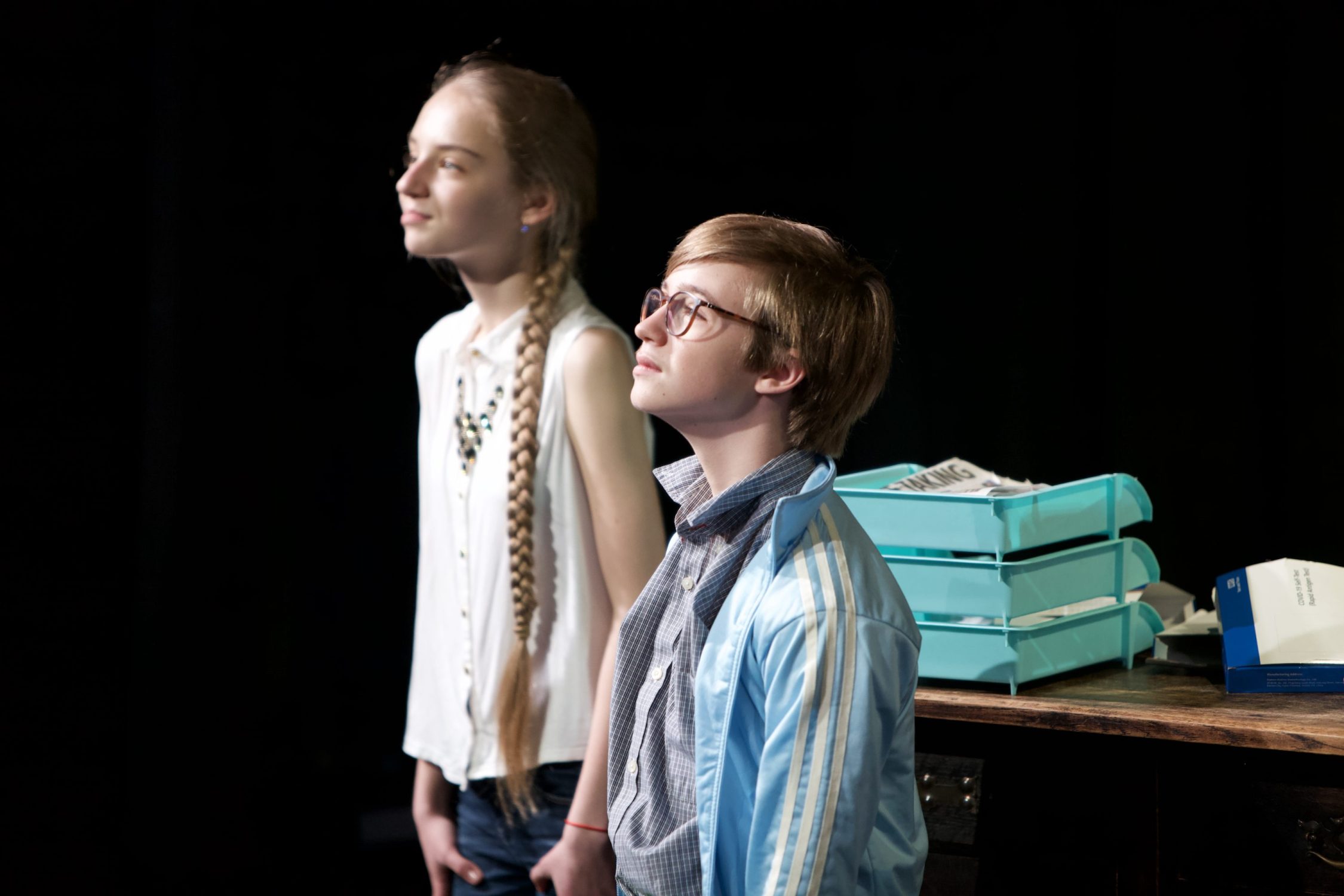 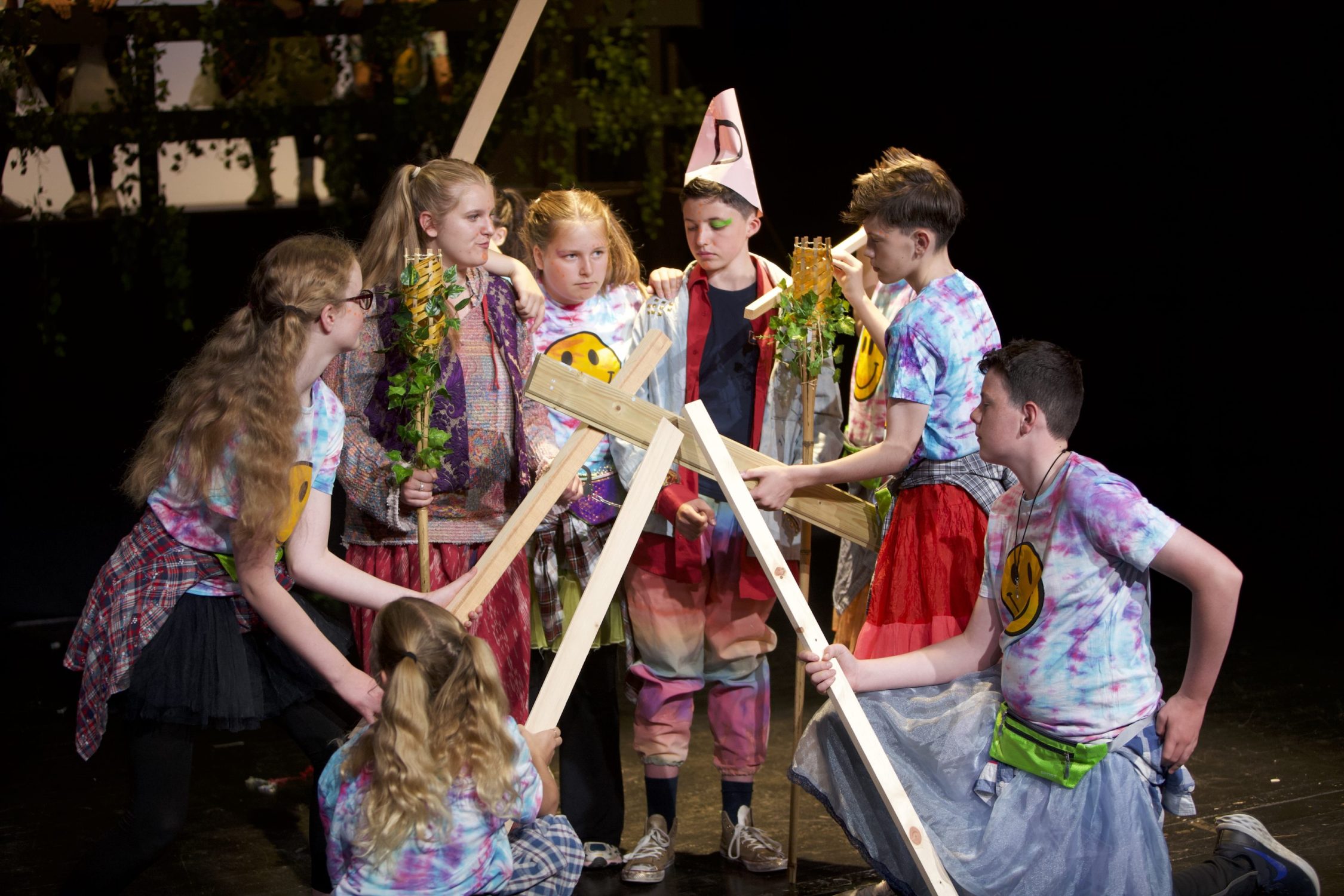