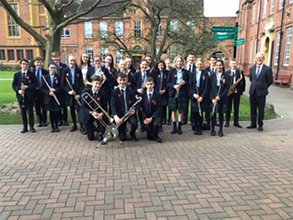 On Saturday, the RGS Wind Band, consisting of students from Years Seven up to Year Eleven, competed in the Worcester Competitive Arts Festival. This annual festival, held here at RGS, has classes for all musical styles and instruments, ranging from solos to ensembles. The RGS Wind Band competed in the ‘Orchestra or Band, 16 Years and under’ class, playing two contrasting pieces: the theme from ‘The Avengers’ followed by ‘I’m A Believer’. The adjudicator commented on how well the students enjoyed playing these pieces, performing with good tuning and articulation. The band gained a ‘merit’ rating and won their class. It was a pleasure to see the Wind Band perform so well on a Saturday, with many parents enjoying the performance also. We thank and congratulate them all.