Year Ten pupils, Sam Taylor and Dan Foster give an account of the recent Debating competition:

“Last Saturday, the International Competition for Young Debaters’, Regional Round took place, with four RGS debating teams participating. The ICYD is a British Parliament Debating Competition consisting of two rounds: the Regional, and the International Finals Day. British Parliament, or BP debating, is a style where four debating pairs, randomly grouped into a ‘table’, compete to hold the most convincing argument by the end of the debate. The pairs are then ranked, 1st-4th, and points are awarded, for example, a win would gain 3 points, second place, 2 points and so on. After three debates, the pairs are ranked and the top three pairs go through to the finals weekend. 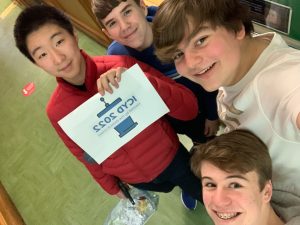 The day got off to an unlucky start, with three out of four of our pairs in one table. The motion in the first debate, ‘this house would permanently replace in-person secondary schools with online schools’, resulted with two of the RGS pairs on 1 point, one on 2 points and the last on 3 points. This motion was followed with ‘this house regrets the rise of social media as a primary news source’, this was a topical motion and something that was fiercely contested. The final debate of the day, ‘this house opposes the narrative that parents should prioritise their children over themselves’, would determine who, if any, made it through to the finals.

I am delighted to report that our team qualified to Finals Day at the Oxford Union, coming 3rd out of over 20 teams. The RGS team, made up of Bella Gray and Katherine McCabe, came in 4th place, making them the reserve team. With none of the RGS teams coming 4th in any of the debates, this just shows how impressive our Debating Society is, and thus we must thank Miss Warner-Warr for her coaching and Miss Waller and Mr Hawking for managing the competition.

Overall, it was a thoroughly enjoyable day, and the results achieved simply echo the dedication of everyone involved.”