The spotlight shone on RGS alumna and Debating Coach, Amber Warner-Warr recently as she proposed the motion in the Oxford Union’s annual ‘No Confidence in Her Majesty’s Government’ debate.

Amber (RGS, 2012-2019) was a key member of the Debating Society during her time at RGS Worcester, going on to study English Language and Literature at the University of Oxford. During her time at Oxford, she has continued her debating and played a significant role at the Oxford Union, while continuing to coach RGS pupils, working sometimes in school and sometimes remotely.

Amber explains: “I was Chair of the Consultative Committee at the Oxford Union in Michaelmas term (of my final year), which has responsibility for all events, and the committee members who worked the hardest, are rewarded with the possibility of speaking in a debate. The ‘No Confidence’ debate is an annual tradition and the most prominent debate of the term.” 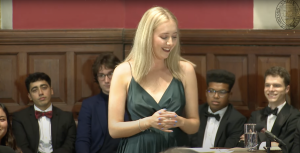 Amber continues: “It was a once-in-a-lifetime opportunity to be involved in such a prestigious occasion, with a chamber packed to full capacity for the first time since the start of the pandemic.

I was most nervous about the jokes, which are traditional for when you introduce the speakers of the opposing side, but luckily they went down well. The chance to open the debate against the government in such a time of political tumult, against speakers such as Sir Buckland and Jacob Rees-Mogg MP, is one that I am very grateful to have received.”

Amber retains close connections with RGS Worcester, inspiring the next generation of debaters, in her role as Debating Coach at the School. 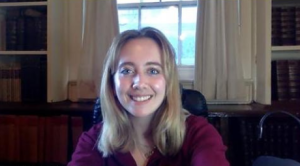 Amber said: “It was also nice to mark the start of my final year of university, before I graduate, and the end of competitive debating for me. For the past three years I have been the RGS Debating Coach, but I loved being behind the despatch box myself! As we look forward to the busiest season in schools’ debating, the Lent term, I have full confidence in all of the debaters who have been so committed during my time as Coach and could not be prouder of everything they have achieved.”

John Pitt, Headmaster, commented, “It is extraordinary to watch a former pupil debate with such maturity and eloquence at the Oxford Union and amongst many prominent political figures. Amber is exceptional in the debate, demonstrating confidence and determination throughout. She has been an inspiration to our debaters in her role as Debating Coach and seeing her at the despatch box in this debate, we can all see why. Many congratulations to Amber and I know we are very grateful for all she has done. As we knew when she left RGS, Amber has a very bright future ahead of her although there will be MPs now who have reason to fear her!”

Amber carried the floor with the Oxford Union voting overwhelmingly in support of a motion of ‘No Confidence in Her Majesty’s Government’ on this prestigious occasion. The motion passed with 228 votes in favour and 95 against. Please enjoy watching Amber and the ‘No Confidence’ debate here.