RGS Drama: from the West End to the Minack 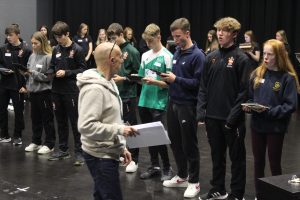 John, who has appeared in West End musicals such as Oliver, Aspects of Love and Les Misérables, shared his expertise in vocal coaching and character work with the 30+ strong cast. 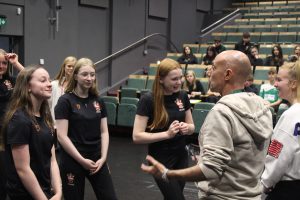 Director of Drama Mrs Witcomb said: “It was a pleasure to welcome Jonny back to RGS Worcester. His enthusiasm for the stage is infectious and he is an inspiration to our young cast. Jonny imparted invaluable advice, which he has learnt through his own experience of performing in the West End, which I am sure will be reflected in our next school production Billy Elliott.” 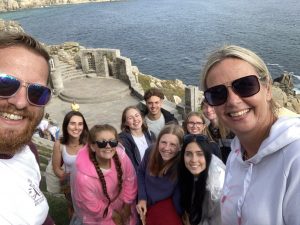 This follows the first trip of the academic year last week, as A Level Drama students visited a sunny (and at times, rather wet) Cornwall. Students visited the atmospheric outdoor Minack theatre in Penzance, watching a hysterical improvised performance of Mischief Movie Night, followed by fish and chips overlooking the beautiful St Michael’s Mount.

After an early start on the Friday morning, the students toured the Minack and learnt how it became the incredible venue it is today, as well as exploring their set text Antigone, using the Minack stage and the Cornish elements. 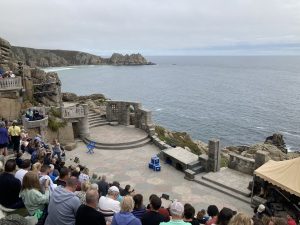 Other highlights included devising and ‘play’ on the Porthcurno beach exploring practitioner Kneehigh’s style and a visit to Charlestown where both Upper and Lower Sixth students worked together as a chorus, and performed the Parados from Antigone on the harbour wall!

Another excellent and productive Drama research and development weekend was had by all.

Please enjoy the following account of the trip below, from Upper Sixth student, Bella Hulbert:

This year’s Cornwall research and development trip for the A Level Drama students, was an exciting opportunity to creatively explore both Cornish theatre practitioner ‘Kneehigh’ and our set work; Sophocles’ ‘Antigone’, gleaning creative inspiration from the environment around us.

Despite the rainstorms that loomed over us throughout the drive, our matinee performance of ‘Mischief Movie Night’ at the Minack Theatre was luckily lit by glorious sun. The open-air amphitheatre, set into the cliffs overlooking Porthcurno Beach was the perfect backdrop for the entirely improvised production. After pitching our tents at the campsite, we made our way to the nearest fish and chips, and enjoyed them overlooking ‘St Michaels Mount’, a tidal island seeped in myth which has served as inspiration for devising projects previously.

The following day, we returned to the Minack, with Upper Sixth gathering inspiration in the fascinating Rowena Cade museum, and both years exploring the stage and seating areas in order to direct the opening scenes of Antigone in a traditional Greek amphitheatre. After a Cornish lunch of pasties and cream tea, we made our way to Porthcurno Beach, where we spent the afternoon. The Upper Sixth utilised the beach setting to stage a section from their Component 3 final exam piece; Kneehigh’s ‘946: Adolphus Tips’, where American soldiers practicing on the beaches for the D-Day landings were attacked by German Boats due to miscommunication, killing hundreds of people. Upper Sixth staged the death scene in the shallows with a promenade audience providing insight into the experience of the soldiers.

Following their discoveries at the Rowena Cade museum, the Lower Sixth performed a Kneehigh-style devised piece on the beach, collaboratively discussing the style with Mr Morgan and the Upper Sixth students afterwards. A key aspect of Kneehigh’s style is a sense of community and playfulness, which we dove into enthusiastically, with team beach competitions such as scavenger hunts and team cheers, performing for an impromptu audience of hikers!

On Saturday we travelled to Charlestown Harbour, where we spent the afternoon rehearsing the Parados from Antigone. Using the architecture and setting of the harbour, we developed our ideas for staging the play, using the walls as the seven gates of Thebes on which the chorus perform the first choral ode. This was followed by free time in St Ives, where Mr Morgan was attacked by seagulls who liked the look of his ice cream.

Thanks to Mrs Witcomb and Mr Morgan, the trip was an incredibly valuable creative experience for us all as actors, but most of all we all felt a sense of ‘home’ in the RGS Drama family, a theme central to Kneehigh’s rehearsal, thematic and performance style.