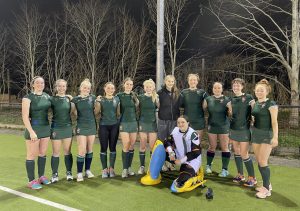 In preparation for the National Semi Finals, the RGS Under 18A team played an evening game against the Stourport Hockey Club ladies team. It was an excellent opportunity to work at a high intensity and test fitness under pressure. It was then onto the England Hockey National Semi Final, played at Reading Hockey Club against Eastbourne College. To get to this stage, RGS had secured wins over Malvern St James, Cheltenham Ladies College, King’s High Warwick, Kingswood and Solihull School. 1st XI Girls’ Hockey team Captain, Amelia Lane prepared the girls with her usual enthusiasm and a motivational video, as well as a lovely team morale boosting exercise on the journey down. They took sole responsibility for an organised and intense warm up and got underway controlling the game. Both teams had opportunities but Amelia led by example to turn over the ball, carry hard, and find the net. The game went to 1-1 and just after half time, Maddie Shaw deflected a well struck penalty corner from Isadora Hercules off the top. Eastbourne reacted with two goals and converted a penalty flick to take a 4-2 lead.

With five minutes to play Goalkeeper Kathryn Shaw stepped off the pitch to add another attacking player and RGS attacked with nothing to lose, scoring again with 10 seconds to play! The game concluded in a 3-4 loss, but the girls left the pitch with their heads held high. knowing they had given it their absolute all. 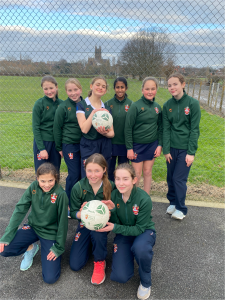 Whilst our seniors are coming to the end of their RGS Hockey career our juniors are just getting going. Our Under 13A team had a successful evening at the Worcestershire County tournament and became County Champions. Millie Kane scored against Bromsgrove to win 1-0, and Thierri Cooke scored against King’s School to win 3-0. After rotating a full squad in the final game, it concluded in a 1-1 draw against Malvern St James, enough to take the County title and qualify for the Midlands Regional Tournament later in the season.

On Friday 11 February and Friday 4 March we are hosting Cheltenham Ladies College and Malvern College to play our senior 1st XI team in ‘Friday Night Lights’ fixtures at our new Worcester International Hockey Centre. Play will commence from 4.45pm and we welcome spectators to come and support the girls in their last few games of the season. This team have been outstanding, and will no doubt provide an excellent display of high quality Hockey for younger pupils to learn from. We look forward to seeing you on the side-lines!

Following on from the Hockey story in last week’s RGS Times, ‘Celebrating Hockey Success at RGS’ we apologise for missing Goalkeeper Keira Higgins, from our list of pupils who have been selected to play Hockey in County, Regional and National Hockey Squads this season. Please see our updated article here. Well done to Keira!