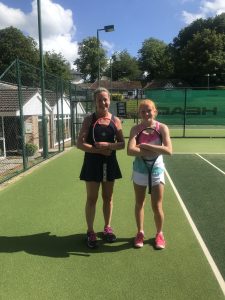 Congratulations to Teacher of Tennis Mrs Witcomb on her recent match win, whilst playing Doubles in the Herefordshire and Worcestershire County Mixed round-robin group, in the June tournament.

After reaching the Semi-finals of both the Ladies Singles and Ladies Doubles at the British Clay Senior ITF Championships tournament in Bournemouth over Half term, Mrs Witcomb and her mixed partner faced strong opposition in a match closer to home and against the only junior player in the Tournament, Year Eight RGS pupil, Daisy Williams!

Daisy said: “When I found out I was playing against my teacher Mrs Witcomb, I thought it was fun! Mrs Witcomb supports our Tennis coaching at School and I partner her in the Winter indoor league so she knows my Tennis very well. As I was the only junior playing in the Tournament, my Tennis was certainly tested against some tough opposition, but my doubles partner and I gave our best, sadly just missing out to Mrs Witcomb and her partner in the final set.”