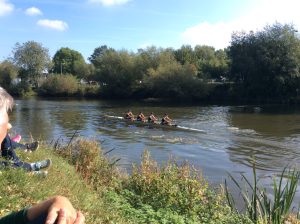 The RGS Boat Club was extremely busy last term, with over ninety pupils regularly rowing. Our newest rowers, pupils from Year Nine spent time working on their technique on and off the water and their development was a joy to watch and rowers from Year Ten showed a huge amount of commitment to the sport this term. This, mixed with a real thirst for the sport, has resulted in the crews really coming together well.

The Lower School Indoor Rowing Club has been, and continues to be, an extremely popular lunchtime club, introducing the benefits of Rowing to pupils in Years Seven and Eight. Pupils have focussed on the sequence of their rowing stroke and essential strengthening exercise for the legs, body and arms. 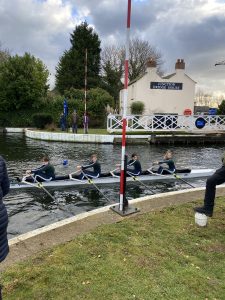 In the Senior group, pupils from Year Eleven, Lower and Upper Sixth have had the opportunity to take part in training both on and off the water, and their commitment to Rowing is starting to show with huge advancements in the quality of rowing. This was demonstrated at the Wycliffe Small Boats Head in December (please see report below).

In addition to Wycliffe, the RGS Boat Club also represented the School at Evesham Junior Head. The unseasonal October sunshine provided the perfect setting for our return to competition after a year and half break due to the pandemic. This term, we aim to continue to provide Rowing opportunities to all pupils, including competing at the Wycliffe Head, Worcester Head and the West Midlands Junior Championships.

The rowers had been training hard on and off the water. Representing RGS and starting the day’s racing were Michael Lui, Daniel Foster, Oliver Scott Worrall and Alexander Cutler-Tucker, coxed by Zachary Jew. Showing great technical improvements from their last race, the boys achieved an impressive 7th place.

Emily Rutter took to the water in the Women’s Junior 15 Single Sculls. After the race Emily had a beaming smile from ear to ear, and should be pleased with her performance. The smiles were mirrored by proud parents watching on from the bank.

To round off the First Division, the Senior Boys squad raced in three coxless quads. The first quad was Toby Butler, Matthew Smith, Freddie Davies and Oliver Giles who finished in 6th just three seconds behind the King’s School A crew. In 7th place ahead of the King’s School B crew were Benjamin Koutrouki, Harry Rutter, James Preece and Thomas Cartwright. The 10th place crew was Zara Povey, Saffron Crump, James Robinson and Joshua Marks. Due to late withdrawals from the event, this crew had only one week’s notice to prepare and should be pleased with the way that they embodied the School’s Charter for Sport by working together to be able to compete successfully.

The Boat Club had an extremely busy Second Division with nine crews racing. The improvements made by the Junior 15 Boys Quad were matched by the Junior 15 Girls Quad of Lottie Hutchings, Eleanor Crampton, Emily Rutter and Charlotte Lamb coxed by Alexander Cutler-Tucker. Commenting on the way that they held off their opposition until the closing stages of the race, the girls were extremely pleased with their performance.

Zara Povey and Saffron Crump were joined by Menna Sutton and Lottie Bond in the Women’s Junior 18 Quad. The crew finished 13th in a fiercely contested event. In his first race, Zachary Jew partnered with Matthew Ferris in the Junior 15 2X, finishing 12th. The Seniors Boys raced in Division One, then raced their doubles in Division Two.

The overall finishing order is detailed below:

Darcy Nock and Liv Marchant finished the division in the Women’s Junior 16 2X – the girls had a smooth race and both came off the water in their matching RGS Worcester hats, happy with their performance!

As the sun broke through the clouds once more and wind rattled down the course Division Three started. Three RGS Worcester crews took to the water to represent the School. The Women’s Junior 15 2X crew of Katherine McCabe and Zara Martin-Green suffered an equipment problem on the start. However, Mr Hales armed with a screwdriver cycled to the rescue, fixed the boat and the girls raced! Marshalls commented on how well the girls raced down the course and they finished 6th out of 11 crews.

Oliver Giles raced in the Single Scull, one year above his age group, finishing 7th in the Junior 18 category. For their second race of the day, Menna Sutton and Lottie Bond raced in the Women’s Junior 18 2X, with the girls composed in what was a difficult head wind. Well done to all of our rowers!

Full results can be found at www.rowresults.co.uk.