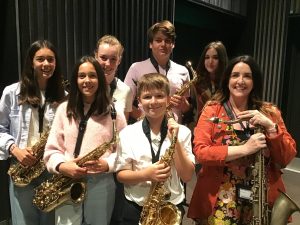 Last week, seven young RGS Saxophonists from Year Seven to Upper Sixth, attended a ‘Sax Day’ at the Royal Birmingham Conservatoire. Run by Conservatoire teachers, RGS pupils joined over 70 adults and other student musicians from across the West Midlands to learn and share in the joy of music.

“After a short stroll from New Street Station, we arrived at Birmingham Conservatoire to a warm welcome from staff and students and were given a timetable of numerous activities throughout the day. Our group collectively decided to go to the ‘Mass Sax Ensemble’, which was amazing! It consisted of a wide age range of saxophonists playing two pieces and performing with the Conservatoire students, who were all extremely talented and helpful. After the first Mass Ensemble rehearsal, my group visited the improvisation class, which I was very nervous about having never done much improvisation in a jazz style before. I had no reason to be nervous though as our tutor, Anna Brooks, was very supportive and helped us learn the basic techniques of improvisation. Between classes we watched the Undergraduate Students perform with several different saxophones in the foyer; they were very inspiring for all those watching. 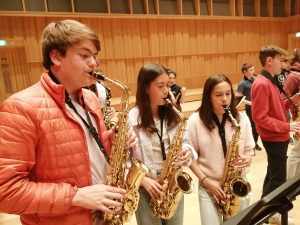 After lunch we watched an Alto and Soprano Sax Recital, with piano accompaniment by Jonathan Radford and Ashley Fripp. I very much enjoyed listening and their talent was sensational. Finally, before our closing concert in the afternoon, we attended a Classical Sax Class, playing alongside several students from the Conservatoire who were all so lovely and made me feel very welcome. We then went to watch RGS Upper Sixth student, George Oates play a solo piece in a masterclass and receive feedback from the professional saxophonist.

The day ended with our Mass Ensemble Concert which was phenomenal; I have never heard so many enthusiastic sax players at once in the mass band, and the students’ performance was yet again inspiring! All in all, it was an amazing opportunity for everyone and I will remember the day as exciting and brilliant.”

RGS Pupils Rock at ‘Redditch Has Talent’  Farewell Class of 2022