With Eloise providing the vocals and Audrey on bass guitar, the two RGS pupils joined two further band members on drums and guitar, in the newly formed band ‘Insomnia’.

The group, who have only been playing together since March, entered the competition and were thrilled to reach the final, held at the Redditch Palace Theatre last Thursday and, after a near-perfect performance, wowed the audience and won their age category. 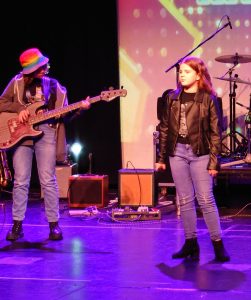 Eloise said: “I was slightly nervous before our performance, but once I got out on stage I asked, ‘Are you ready to rock, Redditch?’ and heard the roar of the crowd. I then relaxed and enjoyed myself. It felt amazing when we won!”

Abi said: “I was really excited to perform alongside my fellow Insomnia band members at ‘Redditch Has Talent’. We’ve only been together as a group since March and so to play, and to win our age category was amazing! The audience reaction was just fantastic – they were clapping along and cheering as we played The Trooper by Iron Maiden. On the back of this performance we have been invited to play at the Redditch Carnival in September which we are really looking forward to!”

Do enjoy watching ‘Insomnia’ during this sound check for their Redditch Has Talent performance.