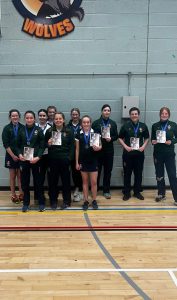 The Under 15 Girls’ Cricket team were delighted not only to qualify for the Lady Taverners Tournament, but to also to progress to the Finals Day, held at the University of Worcester on 31 March.

At this indoor tournament, RGS was accompanied by three local schools, with each team playing against each other and the two top teams qualifying to play in the Area Cup Final, at the end of the day.

The first match for the RGS team was against Christopher Whitehead Language College. With our opponent batting first, RGS bowled outstandingly well and kick started their day. Batting Second RGS had to work hard all the way to the last ball of the match. When scores were tied – a boundary hit and RGS won the game finishing on 86/4.

The second game was against the King’s School and again our opponents batted first. The King’s School posted a very strong score of 108/5, so our run chase was always going to be a challenge, but one the girls really wanted to take on. We fell short due to some good bowling, finishing our innings on 71/3

In the third game against South Bromsgrove High School, RGS put in an outstanding performance bowling first, backed up by outstanding commitment in the field. The girls lifted their efforts and energy to create some great catches and run outs, to restrict our opponents to 73/3. Again, with the bat, we took the game to the very last ball with scores being tied, but we got across the line, with the winning runs being hit to end our innings on 76/3.

This put us in a very good second position after the Area Cup Final.  The girls showed a tremendous effort, playing in the right spirit of fun and competition throughout the day.

The Under 15 Girls Cricket team should be credited for their teamwork and commitment to developing their skills and play. Although this was an indoor Cricket Tournament, it really does complement, and add to the Cricket training and games that will be coming up in the Trinity term. Very well done to all who played.

Alumni All-stars Fundraising to give hope for the future