Finalists in Fencing at the ‘British Youth Championships’

Over the May Bank holiday weekend RGS fencers travelled to the ‘England Institute of Sport’ in Sheffield, to take part in the ‘British Youth Championships’ National Age Group Finals.

This event has not been held for the last two years due to Covid and is fought in three weapons, with separate Boys and Girls categories, and in four age groups. This results in a total of 24 events ranging in size between 29 and 82 fencers, all who have pre-qualified in Regional Competitions. 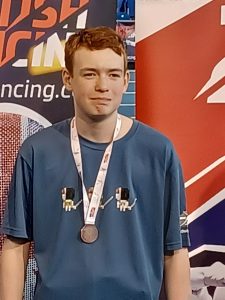 On Saturday, RGS Year Nine pupil Joseph Kington fenced in the under 14 Boys Épée; he was fencing well, winning all but one fight in his pool. This seeded Joseph 13th going into the elimination stage, where he went on to win a string of victories 15-8, 15-1, 15-13, before finally losing in the Quarter final by just one point (14-15) to finish in overall 7th position. The top eight fencers at this event are all considered to be finalists (Quarter finals) and therefore all receive finalist medals.

Meanwhile, Year Ten pupil Zara Martin-Green was fencing in the girls under 16 Sabre. This was to be a tough event for Zara as she has done little competitive Sabre, but she fought well and finished in 28th position.

Elsewhere on the same day, Year Ten pupil Matthew Fallows, was fencing in the Boys under 16 Épée. Matthew had a solid pool, winning two fights and achieving a bye through the first elimination round before going out 7-15 to the number 12 seed and finishing 54th position.

On Monday, returning fencers Zara, now doing Foil, and Joseph, now doing Sabre, were joined by one of our older fencers, Lower Sixth student Lucas Hancock, fencing in the Under 18 Épée.

Zara now on her third day of competition, looked a little tired but nevertheless won two fights in her pool, but went out to the number 28 seed, to finish 37th as seeded.

Joseph also managed two wins in the Sabre, stormed to victory 8-15 in his first elimination before losing narrowly (13-15) to the number 8 seed. Joseph also placed as seeded, in 25th position.

Lucas fenced well, winning four out of six of his pool fights, seeding him 17th. He took a decisive victory in the first round of elimination 15-5, then won against seeding in the second round of elimination (15-11) before drawing the number 1 seed in the last 16. He put up a good fight, but ultimately lost 9-15 to finish 13th.

Well done to all of our competitors in this national competition and congratulations to Joseph for his well-deserved and hard-earned medal.