Cricket season is off to a batting start

With 14 Cricket fixtures played last weekend for both Boys and Girls teams, the Cricket season has certainly got off to a busy start at RGS!

We saw honours spread fairly evenly across all Year groups and it was good to see  the Girls winning the majority of their matches against Wycliffe College and Dean Close School. Congratulations to RGS pupil Charlie Taylor, who scored a Century for the RGS Under 12A team in their match against Dean Close School. The 1st XI team also played in the HMC T20 competition on Sunday.

“In the Girls Under 15A team Cricket match against Wycliffe College, RGS opened the batting with our Captain Fynn Butler and our County player Molly Ayers, who started with a strong two four’s. Each pair batted for two overs and we successfully kickstarted our season with some great shots and some excellent communication between our batters! Holly Potter and Lexie Hubbard were the next batting pair, followed by Katie Reynolds and Katy Pitt and then Isabelle Fawcett and Hannah Agoston; at this point we were on 200 due to a few wickets so we needed some good shots. Luckily myself and Kiera Higgins got a four and conceded no wickets.

Lola Jones and I were our last batting pair and we got a frustrating run out, but managed to keep the score up with some good shots, resulting in a finish on 211. This meant we needed to take lots of wickets when bowling. We knew we could do it with our strongest bowlers and luckily there was a lot of accurate bowling with few wides. Our wicket takers were: Isabelle, Fynn, Katie Reynolds, Lola, Molly and Kiera, who in total took nine wickets! We also saw a great maiden over from Katy Pitt.

Coming up to the last two overs, it was very tight and our opponents only needed three runs to win, but fortunately we took two wickets, resulting with RGS finishing with a win! Well done girls!” 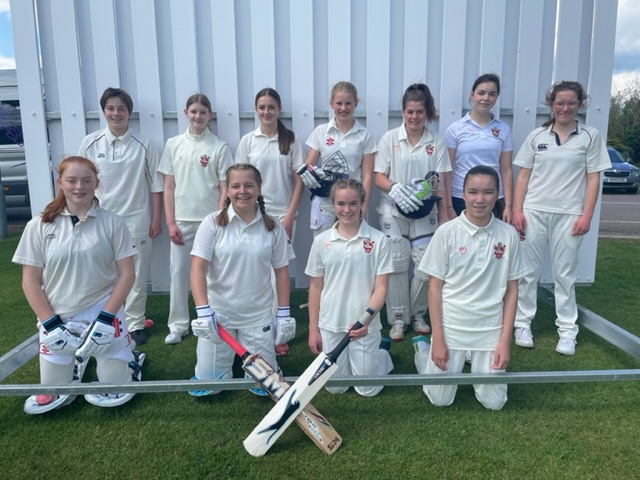