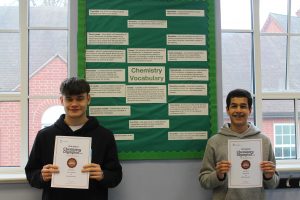 A group of A Level Chemists took part in the 53rd International Chemistry Olympiad in February, run by The Royal Society of Chemistry. The online event involved participants from all over the globe, tackling tricky topic-based problems, the majority of which were more on a par with first year undergraduate level studies. The pupils were eased into the paper by having to write equations on the atmospheric and surface chemistry on the planet Venus, in response to a recent controversial paper that proposed the natural existence of phosphine in its atmosphere. After a rather quirky question on 3D ‘social distancing’ in certain molecules, some synthesis problems followed by four more challenging, longer questions, pupils could breathe once more following this ordeal! Credit must go to all 20 pupils who participated and did well to cope with such complex questions, many of whom were from the Lower Sixth.

We enjoyed a fabulous set of results this year with a medal haul of two Gold, two Silver and six Bronze medals. Particular mention should go to Aaron Lad (Lower Sixth) and Liam Leonard (Upper Sixth), who, by scoring a Gold medal each, were placed in the top 9% of 9,000 students who participated worldwide this year. Well done!