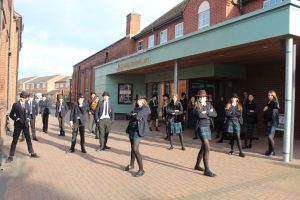 Over a year ago, pupils in Years Eight and Nine auditioned for the first Summer Musical – Bugsy Malone. The show was going to be an all-action musical opportunity for the younger cast members. However, shortly after casting the show Covid-19 struck and we were plunged into the first national ‘lockdown’. Not to be deterred, rehearsals seamlessly moved online, and the cast were able to continue work on the show. With the news that a performance in the School’s Performing Arts Centre was unlikely, Musical Director, Mrs Spencer and Director, Mr Morgan looked for an alternative plan, deciding to use film and create the first RGS ‘streamed’ school production. 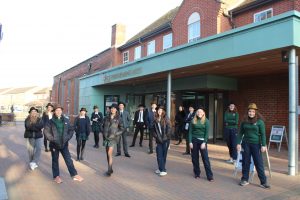 Mr Morgan, explains: “Following rehearsals, we sought to film as much of the content as we could in September and the start of October 2020. Not being able to mix Year group ‘bubbles’ meant that some roles needed to be changed at late notice and a number of scenes were omitted. The cast were amazing following our virtual direction and even more amazing at working to the tight filming schedule they were given.”

Following the months of hard work, filming and editing, the School’s Performing Arts Centre was filled with excitement this week, as cast members in their Year group ‘bubbles’ and distanced, attended the premier of the final cut of Bugsy Malone film, ahead of its online launch.

Mrs Spencer, adds: “Huge congratulations should go to the cast and crew who were terrific to work with and we are so grateful that they persevered and kept their enthusiasm and energy levels up throughout. This would not have happened without them and the results are fantastic!” 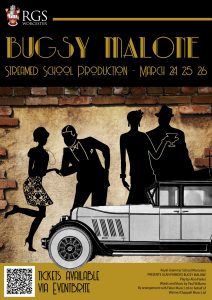 John Pitt, Headmaster, commented: “Very well done to all involved in creating a fabulous film and the first streamed school production for RGS. I witnessed the rehearsals in my own home and to create a production on film despite all the challenges is a tremendous achievement from everyone.”

The play was excellent, and very entertaining, and everyone should feel very proud of their achievements. The film reached the other side of the world. We received an email from Australia where grandparents had woken up before 5.00am to watch online and wanted to share their enjoyment of the production.

The final streamed production of ‘Bugsy Malone’ will be this evening, Friday 26 March at 6.00pm. Tickets for the show are free and available here.

Combined Cadet Force is Back in Action