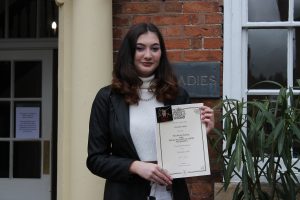 CCF Colour Sergeant Charlotte Smith, Upper Sixth, has been offered a place at the Royal Military Academy Sandhurst after passing the selection process. The offer remains open for six years and provides Charli with the opportunity to take up the Commissioning Course when she wishes to do so. Charli is planning to take a Gap Year before going to University to read Medicine and then join Sandhurst in due course. Charli received a certificate and hat badge to mark her achievement. 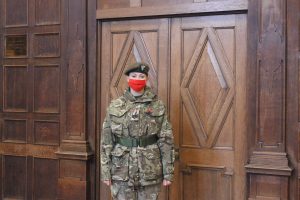 Charli, said: “I have been a member of the CCF since joining RGS in Year Ten. I really enjoy all aspects of CCF and it has sparked my interest in the Army. Alongside this, I love science and wish to have a career in medicine. I realised I could combine the two and so applied for the Army Officer Scholarship Scheme. I was subject to a series of interviews before being selected to attend the Army Officer Selection Board, which took place in Westbury in October last year.

“This was a very challenging two days during which I had to undergo a variety of assessments. These included a physical assessment, assault course, team exercises, and a series of academic and problem solving tests. In addition, all candidates had to undergo interviews with the selecting officers. This was a fantastic experience, albeit quite a daunting one! I am delighted to have been selected for training at the Royal Military Academy Sandhurst, which is an opportunity I can take up once I graduate.”

Many congratulations to Charli who follows a strong tradition of pupils taking a career path in the Armed Services.

Combined Cadet Force is Back in Action ‘Bugsy Malone’ Hits Our Screens!

Combined Cadet Force is Back in Action