Back to the ‘90s: Excitement builds for School Production of ‘The Bacchae’ 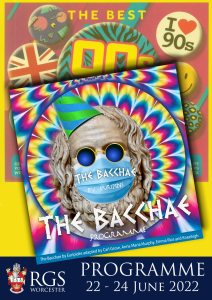 Excitement is mounting for the forthcoming School Production of ‘The Bacchae’. With opening night now just a few weeks away, the committed, talented and enthusiastic cast and crew have been working hard; rehearsing, honing scripts, polishing and refining performances, ready to premiere the play in the Schools Performing Arts Centre on 22 – 24 June.

‘The Bacchae’ is an ancient Greek tragedy written by Athenian playwright Euripides, and was first performed at the Theatre of Dionysus in 405 BC. The young RGS performers will be presenting an anarchic adaptation of the play by Kneehigh Theatre company, and will bring the story of King Pentheus, his mother Agave and the god Dionysus to life, in the arena of the 1990s.

As the show’s Director and Teacher of Drama, Mr Morgan, explains, “It will be a production to assault your senses! The RGS cast and crew have been brilliant, and this production will be a reflection of the vibrant culture and music of the ‘90s decade. Audiences can look forward to wild costumes, loud music, dancing, and a little bit of gore – because what would a Greek Tragedy be, without it?”

As well as the last major Drama production of this academic year, ‘The Bacchae’ is also set to be the final production by RGS Teacher of Drama, Mr Morgan, who will be leaving RGS at the end of the Trinity term to take up a promotion at a school in the South-West. Mr Morgan said: “When I first read this Kneehigh adaptation of Euripides’ ‘The Bacchae’ I knew that I wanted this to be my final production here at RGS, and what a performance it is set to be!”

‘The Bacchae’ will be performed in the state-of-the-art, RGS Performing Art Centre, from Wednesday 22 June until Friday 24 June. Tickets cost £5 for adults and £3 concessions and are available from boxoffice@rgsw.org.uk.