We were very pleased to see RGS alumnus, Ed Pollock (2003-11), bag his maiden century in Worcestershire’s first match of the new Cricket season, in the County Championship against Leicestershire.

Ed’s second innings knock of 112 in 122 balls put the Pears in a strong position in this opening match. The left-handed opening batsman’s tally included 10 fours and 2 sixes. The Foxes battled hard to salvage a draw with just one wicket spare but, despite this, it was a positive start away from home for Worcestershire.

Ed’s batting ability was obvious at an early age and he has the distinction of being the youngest RGS pupil to have three centuries in a single season recorded on the Flagge Meadow Batting Honours Board!

Further examination of the Honours Board reveals that Ed is a member of an exclusive club, alongside the following RGS alumni:

Three Centuries in a Single Season (in brackets) for RGS 1st XI: 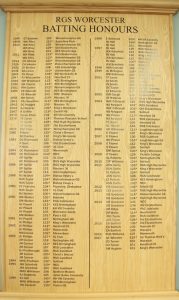 Ed has specialised in white ball cricket in recent years and following a bout with Warwickshire, Ed rejoined his home county at the end of 2021, with the brief to cover all forms of the game. He has certainly made an early statement of intent with the red ball. We look forward to following Ed’s progress with the County and wish him plenty more centuries.

The new Cricket season has started once again this term at RGS, with regular competitive fixtures back in the school calendar. Keen RGS cricketers had the opportunity to join a Pre-season Cricket skills workshops over three days at Flagge Meadow during the Easter break, which saw over 70 pupils (both boys and girls) from all year groups in attendance. We look forward to updating you on progress later in the term.

Looking to the Future at the RGS Careers & Higher Education EXPO Jumping towards the final: Equestrian success for RGS Schools