‘When a School really is a Charity’: Headmaster’s Article Published 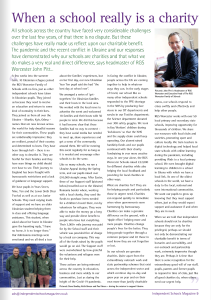 We are pleased to share an article written by the Headmaster, John Pitt, which is published in the June / July issue of the Independent Schools Magazine.

In ‘When a School really is a charity’, Mr Pitt reflects on both the challenges of the past years of the pandemic and the recent conflict in Ukraine and describes how the RGS Schools’ have responded, making a real and direct difference to local and communities further afield. In the article Mr Pitt explains: “As one of the oldest schools in the world, we have a duty to local, national and even international communities. We want our pupils to grow up knowing that they must support others, just as they would expect support and assistance if and when they are in need.”

The article was published in the magazine and a link created on the Independent Schools Council’s (ISC) news feed. It also featured on the IDPE newsletter which goes to Foundation and Development Officers across the country.

Read the full article in the Independent Schools Magazine here.