The RGS Under 13 and Under 15 Girls Cricketers began their competitive campaign of 2022 by participating in the ECB Lady Taverners Schools Indoor Cricket Tournament at the University of Worcester. This is a nationwide tournament beginning with Area matches. 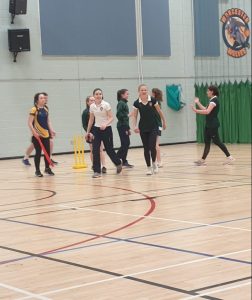 The Under 13 Team: Our first fixture was a close, hard-fought encounter against our sister school RGS Dodderhill. Chasing down a very good score from our girls of 106, RGS Dodderhill managed to secure the win. It was a high scoring game and despite the loss, our girls settled in after some early nerves to put in a great effort. The experience of the first game set up the rest of the afternoon and the girls went from strength to strength.

The second game of the tournament against Christopher Whitehead proved this, with RGS putting in a commanding performance with the bat, followed by outstanding bowling and fielding to win the game 138 – 57. Another win followed against King’s School with the final scores after batting first, were 106-58.

Our final game of the day was against Malvern St James Girls’ School, with RGS proving too strong, batting first and setting Malvern 112 for the win. All the bowlers did a fantastic job to restrict our opposition to 74.

Three wins from four games placed RGS Worcester in the Runner-up position for our region. 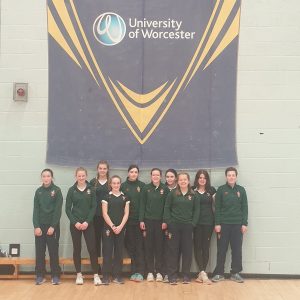 The Under 15 team: Our Under 15 Girls competed in three fixtures across the afternoon, being successful in the first game against The Chase School, posting 87 and bowling the opposition out for 38.

The second game saw the RGS Girls matched up against a strong Malvern St James squad. This was an epic game that resulted in a tie, with RGS not quite getting across the line. It was a hard-fought match between two strong teams, with a final result of 80 runs a-piece. The third game matched RGS against Christopher Whitehead, with RGS playing an outstanding match and winning convincingly, batting second 64-67.

The two wins plus split points in the tied fixture means that RGS Under 15 Girls team have progressed to the Regional Stage of the Lady Taverners Indoor Cricket Tournament. Area Finals Day will take place on the 31 March at the University of Worcester.

Overall, we had two great afternoons of Cricket for our girls, with some outstanding individual performances with the bat, ball and in fielding. All players were able to have an impact on a game at some stage and this is a great sign moving forward.

RGS players showed great competitive spirit but also played the game in the right way – supporting their teammates plus respecting the opposition and officials. Congratulations to both teams for their performance.