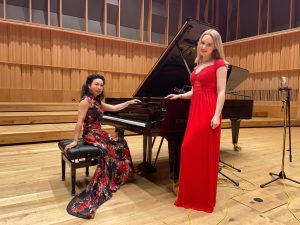 Earlier this week, former RGS student and singer songwriter Tazmin Barnes, was invited by the Chinese Embassy in London to perform at the annual Chinese New Year celebrations for His Excellency, Ambassador Zheng Zeguang and his mission colleagues.

Supported by world renowned pianist Didi Xiao and an ensemble cast of musicians, dancers and even a Sichuan ‘Face changer’, Tazmin performed a New Year greeting to welcome in the Year of the Tiger, and then sang two traditional folk songs – all in Mandarin! 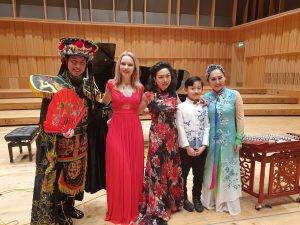 The event was organised by the Cultural Office of the Chinese Embassy and aims to promote closer connections between the UK and China. There were over 450 esteemed guests in attendance including; Consulate Ministers, members of the China-Britain Business Council and British Council, dignitaries from international embassies, the Foreign and Commonwealth Office, British MPs, peers, business leaders, academics, film producers, the BBC, and even Lord Peter Mandelson!

Originally recorded at the Royal Birmingham Conservatoire, the performance has since received much admiration and has been featured on CCTV 13 (China’s national news channel as part of the daily Xinwen Lianbo programme), with further official broadcasts of the event on a wide variety of platforms including; The China Cultural Network (watched by over 250,000 viewers!), Tencent Video, Weibo, Youku (Chinese Youtube) and Culture China China Network. 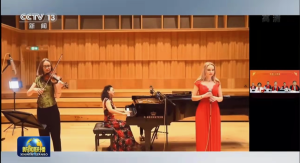 Tazmin said, “It was an incredible experience to perform alongside such an elite and diverse range of artists and I had no idea who or how many might be watching!  There is no doubt that the opportunities I had at RGS provided me with a really solid foundation in performing arts and I encourage all current pupils to grasp every chance they have as you never know where it might lead!”

Tazmin spent the early part of her life in China, before moving to Worcestershire and attended RGS Worcester, leaving in 2020. She is now in her second year studying a Liberal Arts degree at the University of Exeter University, with a ‘major’ in Spanish and ‘minor’ in Mandarin, and whilst continuing to pursue her musical career. Tazmin has performed at many high-profile events, reached the national final of The UK Songwriting Contest, been featured in BBC Introducing and has released several EPs and singles. Although primarily known as a ‘pop’ artist she has regularly recorded and performed classical crossover genre work in both Chinese and Spanish! Being able to sing in English, Mandarin and Spanish covers off most of the world’s population and will give her an amazing opportunity for the future.

Speaking to RGS last year after the release of her new single, ‘Nine More Lives’ Tazmin explained “I am so grateful for the encouragement RGS has given to my music and for the ongoing support within the RGS community. I really hope that someday in the future I can come back to the School and perform some of my songs.”

Many congratulations to Tazmin and we look forward to following and supporting her continued music success in the future.