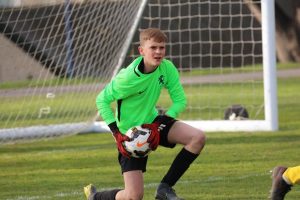 Year Eight pupil Theo Houston has signed off the academic year, with the wonderful news that he will be playing Football for Aston Villa Academy next season.

After being scouted at a local 6-a-side tournament in June, goalkeeper Theo was offered a trial at the Academy where he made a good impression and was quickly signed up for the forthcoming year by the Premier League Club.

It’s been a busy sporting year for Theo who also had trials at West Bromwich Albion’s Football Academy as well as training with Herefordshire and Worcestershire’s County Tennis squad.

Theo has competed in a number of Tennis events including the Boys Under 16 National Club League fixtures; reaching the Regional stages of the ‘Play Your Way to Wimbledon’ (PYTW) Under 18 Boys Doubles event and qualifying for the County Finals of the PYTW Under 14 Singles event, which will be held this weekend and where the winner plays in the National Singles event on the grass at Wimbledon in August.

Many congratulations to Theo for his many sporting talents.