Congratulations to five Upper Sixth students from RGS Worcester who have received offers from Oxford and Cambridge Universities to read a broad range of subjects covering the Arts, Humanities, and Sciences.

Competition for places at both universities remains fierce, with large numbers of very well qualified applicants for every place. It is a tribute not merely to the academic flair and intellectual curiosity of these students that they have received offers, but to their perseverance, drive, and dedication.

Katy Marsh, who has an offer to read Engineering, said: “Receiving an offer from Cambridge was such an awesome moment after the long and challenging application process. I am now really looking forward to the new challenges and opportunities presented by studying at this amazing university!”

James Preece and Elizabeth McCabe, who are both excellent competition debaters with numerous successes to their names, have offers for Human, Social and Political Sciences at Cambridge, and Politics, Philosophy, and Economics at Oxford respectively, which are amongst the most competitive undergraduate courses in the world. They had this to say:

Elizabeth: “I am thrilled to have an offer from Oxford, especially after such an intense but rewarding application process. I could not be more grateful for the support and guidance I have received. Grades permitting, I can’t wait to delve into my subjects with world renowned academics.”

James: “I was thrilled to receive an offer from Cambridge, and feel very grateful to all the teachers who helped me along the way. The prospect of studying Human, Social and Political Sciences at Cambridge excites me tremendously, and I am currently focusing on my A Levels to ensure I get the grades I need.”

Headmaster, Mr John Pitt said: “This is a considerable achievement and congratulations to all five pupils. It is wonderful to see RGS pupils flourishing in this wide range of subjects and the number of offers this year from Oxford and Cambridge demonstrates the talents of our students, the dedication of their teachers and the academic stretch and inspiration the students receive. Thank you to Dr Russell and his team for overseeing the Oxbridge application process and giving the students the practice they needed to be ready for the admissions tests and interviews which were online again this year. We are all extremely proud of what has been achieved.” 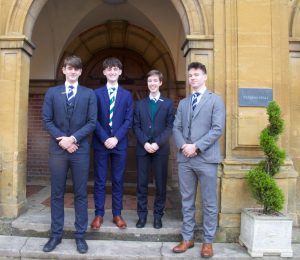