Upper Sixth Form student Tazmin Barnes has continued to receive great support for her music from BBC Radio, having recently been nominated as Artist of the Week by BBC Music Introducing in Hereford and Worcester.  Throughout last week they played her original songs, ‘9 More Lives’, Take It Easy on Me’, ‘Trapped’, ‘Breathe’ and ‘Call Me’ on the evening shows hosted by Kate Justice and Tammy Gooding culminating in a ‘live’ interview on Friday night. During the interview she was asked questions about her early upbringing in China and then explained how issues such as Mental Health, Climate Change and Female Empowerment have inspired her song writing. 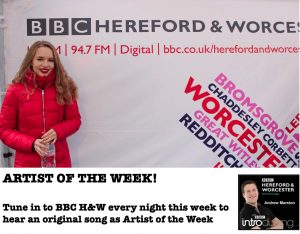 BBC Music Introducing Hereford and Worcester have been regular promoters of Tazmin’s music having now featured 14 of her original songs on their shows. Earlier this year they selected her as one of their ‘Top 10 Artists Hot for 2020’ and have recommended her music for national airplay with Radio One and BBC Radio Six Music.

In addition, BBC Radio Shropshire featured Tazmin on their Sunday evening Introducing show and played several of her tracks.

Tazmin did have a full summer schedule of festivals and events planned, which all now have been cancelled. She has used the time to write new music and to perform on several ‘Facebook Live’ events. In July she will be releasing a new single in collaboration with a leading EDM producer on their ‘Glow Beets’ label.

Many congratulations to Tazmin and we look forward to following and supporting her continued musical success in the future.

The Upper Sixth have learned to iron, too! RGS Worcester leads the way in Remote Learning with Apple