During October, Worcester celebrated its proud association with renowned composer Sir Edward Elgar, during the city’s month-long ‘Autumn Elgar Festival’. At RGS we are similarly proud to honour the distinguished musician and his connection with the School.

Foundation Director, Scott MacDonald, explains: “Many residents of the County are aware that Sir Edward Elgar hailed from these parts, but what is less well known is that, while he was honing the composing skills that would secure his future reputation, he inspired young musicians by teaching at Worcester High School for Girls, where he was appointed by Miss Alice Ottley as a Violin Teacher. 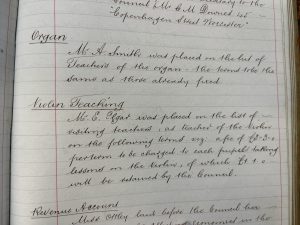 In 2016 when RGS commemorated this significant aspect of Worcester’s history with the installation of an iconic red plaque provided by The Elgar Society. This plaque is now sited on the Britannia House gatepost underneath Miss Ottley’s Blue Plaque as a lasting record of Elgar’s time at the School.”

We hope that Sir Edward would be proud of our Music tradition at the School. Music continues to flourish at RGS, with pupils afforded excellent tuition along with a wide range of opportunities to play and sing in numerous concerts and performances.