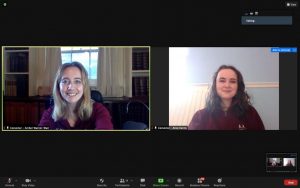 Over 130 of the best schools’ Debating teams from the UK and across the world competed at Oxford Finals Day last weekend. Even in the face of such hugely stiff competition, Elizabeth McCabe and James Preece (Team: ‘RGS Worcester MP’) qualified for the quarter-finals in 14th place, the culmination of our most successful Debating season to date.

In 2020-21, the RGS Worcester Debaters reached the Open Finals at Birmingham, Warwick, Manchester and Nottingham, winning Nottingham Schools as well as the Silver Final at Manchester and the Bronze Final at Birmingham. However, doing well at Oxford Schools Finals Day was our biggest challenge yet. Three teams from RGS Worcester qualified from the West Midlands round and took part in four debates via Zoom on Saturday 13 March. From these debates, a points league table was created with the top 16 pairs then debating again on Sunday in the quarter-finals. 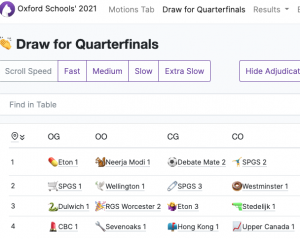 Five international teams from Hong Kong, Slovenia, Ireland, India and Canada as well as three teams from St Paul’s Girls School, two from Eton and one from Westminster, Wellington, Dulwich, Sevenoaks and Debate Mate qualified. And so did RGS Worcester MP! Even though we were knocked out by Eton and Dulwich in a closely-fought quarter-final, this was a massive achievement for us. The motion was that this House prefers a world where government decisions are made by individuals who are experts in specific fields instead of elected politicians, with James and Elizabeth opposing the motion.

It was also lovely to see our coach, Amber Warner-Warr, organising and running the Oxford Schools competition, coordinating teams from across the globe, and with such efficiency and confidence. She received the news at the same time as we did as she was not involved in the judging and was as pleased as we were when James and Elizabeth qualified.

Only the Durham Schools competition remains this season on 27 and 28 March which will round off an amazing year for the RGS Debating Society.