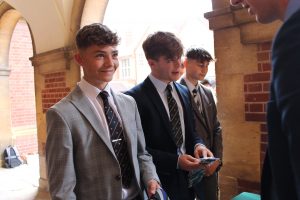 The School Captains, Senior Prefects, House Captains and Prefects for the 2021-2022 academic year were appointed at the start of term in a special Assembly held in the School’s majestic Perrins Hall.

The ceremony was attended by the Senior Leadership Team and Sixth Form Team and included the Headmaster congratulating and briefing the Prefects on expectations for their new roles. 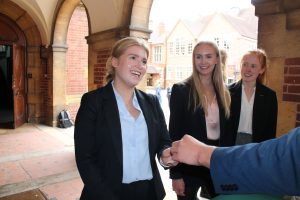 The event was particularly poignant this year because former School Captains Alex Owen (2019-20) and Tom Ehlers (2020-21) gave out the lapel badges and ties and then shared their knowledge and own experiences with the new School Captains: Lucy Ball, Amelia Lane, George Oates and James Preece. Alex has kindly taken time to write a Prefects Handbook to assist the new Prefects as they take on their roles since they were not able to have a handover last summer due to Covid-19 restrictions. 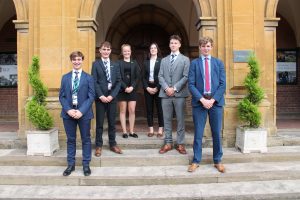 School Captains and Prefects are intrinsic to the operation of the School at RGS.  They perform school duties, provide tours for visitors, assist staff and younger pupils and the House Captains run the House system. They also contribute to the Pastoral system as Pastoral Prefects. Each Form in the younger Year groups has two Upper Sixth pupils allocated, one boy and one girl. Working with the Form Teacher, each Prefect gets to know the children in their allocated class extremely well. This provides an effective additional support for pupils and an early interaction with older students in the School.

Read more about the Prefect system at RGS Worcester here.