Last week, the RGS Worcester Senior Debaters once again enjoyed huge success, winning through to Finals Day at Cambridge University as well as the Regional Final of the English Speaking Union Mace competition.

Tuesday night saw the team of Elizabeth McCabe, Katy Marsh and James Preece qualify for the Regional Final of the ESU Mace. This is a national competition where students can prepare their arguments in advance, making seven minute speeches. The only difference this year is that the debates are online via Zoom. Working with their coach, Amber Warner-Warr, the team won through, having proposed the motion given to them that ‘This House would ban job applicants from disclosing the names of educational institutions that they have attended’. 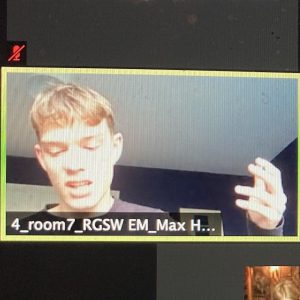 On Saturday, it was the South West regional round of the Cambridge Schools competition. Across four rounds of debating on Zoom, twenty-eight teams were vying for only three team slots on Cambridge Finals Day in March. With debating behemoths like Wellington College in the round, this was going to be challenging! RGS rose magnificently to the occasion, taking two of the three places and relegating Wellington to the Third spot. Congratulations on this outstanding achievement to our Lower Sixth debating pairs of Elizabeth McCabe and James Preece who qualified in First place and were ranked Fourth equal on the Speaker Table and to Kasia Czyrko and Katy Marsh who were Second, with Kasia the Third best speaker at the competition.

Up next, the Midlands round of Oxford Schools, one evening, two rounds of debating – it would prove to be fast, furious and frighteningly competitive…an update comes next week in The RGS Times!