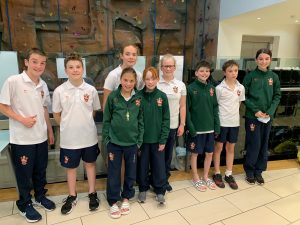 On Tuesday 28 September, RGS entered three teams into the ESSA Secondary School Team West Midland Swimming Qualifiers, held at Malvern College. In this national swimming competition, the top twenty schools in each age group will have the opportunity to race in the London Olympic pool in November. RGS took quite a young team to the event, with the Junior team being made up largely of Year Seven pupils. Although it was good to compete against local schools, the times recorded were all that mattered for the competition.

We now await the final results to compare our times with the top schools in the country. RGS has achieved a place at the national finals before but, even if we do not reach the finals this year, the future of our swimming is certainly in safe hands with our promising teams. Well done to all those who represented RGS so well: the Intermediate Girls team and the Junior Boys and Girls team are pictured below.