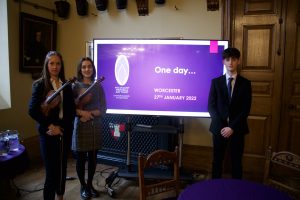 This week, representatives from RGS Worcester attended The Guildhall in Worcester to mark Holocaust Memorial Day.

This year commemorates the 77th anniversary of the liberation of Auschwitz, and this incredibly important event is most likely the last decade that we will hear the voices of those who experienced the tragedy of Auschwitz first-hand. The theme of the 2022 event is ‘One Day’.

Dr Mindu Hornick MBE was the guest of honour at the ceremony, and talked of her experience surviving both the Auschwitz-Birkenau concentration camp and a slave labour facility during the Second World War.

The Mayor of Worcester and other community and religious leaders, alongside local pupils offered their contributions. RGS Worcester pupils took a prominent role in the event, with talented musicians, Bella Hulbert, Amelia Wood and James Kitchingman performing John Williams’ moving Main Theme from Schindler’s List during the ceremony, as well as a short reflective Prelude by Shostakovich to open the event. 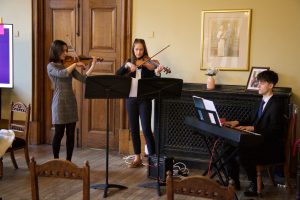 Headmaster, John Pitt also attended the event on behalf of the School, said: “We were very honoured to be part of this city-wide event again this year. The theme of ‘One day’ was very powerful as were the words of Dr Mindu Hornick including the fact that it took her nearly 70 years before she felt able to speak of her experiences. The continued capacity of the human race to inflict suffering is clear in genocides since the holocaust and the key messages or kindness, tolerance and working together were clear from all of the speakers at this community event. I was immensely proud of our pupils’ performance which was so powerful.”

To mark Holocaust Memorial Day in school, Philosophy and Religious Studies teacher Mrs Soman put together a Virtual Assembly which was watched by all pupils at school over the last week. This featured an interview with Louise Griffiths, RGS Development and Alumni Relations Manager, who shared her family connections to the Holocaust and her experiences studying the issue of genocide at postgraduate level and her passion for educating younger generations so that these events can be prevented in the future.