During last summer 2020, Lower Sixth student Ethan Farmer, made the decision to pursue an EPQ (Extended Project Qualification), focussing on his love of ’80s and ’90s music, boy band culture and musical theatre. In doing so, Ethan has now written his own musical! As part of the qualification, students also need to produce either an essay or ‘artefact’, and so Ethan decided to direct a scene from his musical involving his peers. 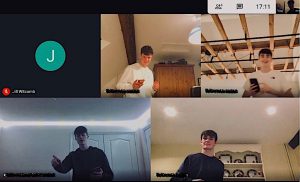 Ethan’s research has been impressive, particularly his Zoom interview with Danny Wood from American Boy band ‘New Kids on the Block’ and online contact with Terry Coldwell of ‘East Seventeen’. Ethan also spoke in depth to Jonny Barr, West End veteran, whom he met and worked with during his visit to RGS to host a workshop for Les Misérables.

Like any writer and director, Ethan needed to find the right cast, and so last week he held an online audition – quite a task in normal circumstances, but much more so in ‘lockdown’! Ethan explains in his own words how the audition process worked:

“On Monday 18 January, I prepared an audition for my EPQ performance in which seven boys from the Lower Sixth experienced an energetic workshop revolving around my boy band musical script, ‘Reignition’. Splitting them into two groups, I spent 45 minutes auditioning, based on their singing and acting skills and how well they would fit into my boy band, ‘Echo’. The audition began with a performance of ‘Step by Step’ by New Kids on the Block, which involved some extravagant dance moves and impressive performances! Attention was then turned to the script, where all the boys embodied my characters and showcased their talent. The evening was great fun and everyone who was involved can be very proud of themselves.”

Ethan did a fantastic job and we are very much looking forward to watching his final presentation. Perhaps a new boy band is in the making…..

‘Can you keep a secret?’: De-coding the Billingham Society Year Seven Music Masterpieces