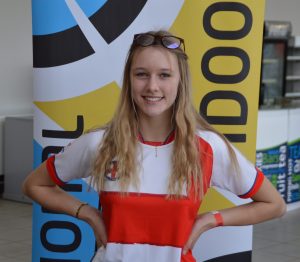 This was Emelia’s first appearance representing England but Emelia showed no nerves with her winning match contributing to England’s overall victory and becoming 2021 Home Nations Champions.

Emelia also competed in the Junior Championships on Saturday. Though behind in the early stages, her resilience was evident, recovering lost ground and she finished the Championships by adding the UK Indoor Under 18 Ladies’ title to her Master’s title that she earned at the end of the summer. In doing so, Emelia became the undisputed number one Junior Girl in Archery in the country! 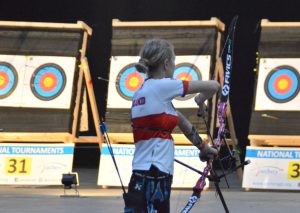 Emelia was pushed out of her comfort zone competing in the Senior Championship event. She kept her composure, shot well and ranked 13th. She then progressed well in the head-to-head (elimination rounds), before going out to a participant who has competed at the Olympics. Emelia finished that day with the final ranking position of 9th.

Director of Sport, Gareth Roots said: “Congratulations to Emelia on this incredible achievement which is testament to Emelia’s positive work ethic and drive.”  Emelia is now hoping to take competitive Archery to the next level, with a call-up to the GB Junior team in Spring 2022.