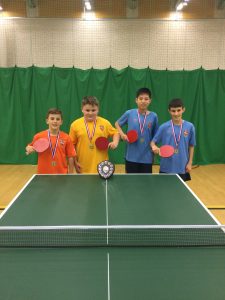 This week the RGS Worcester Table Tennis A team made their competitive debut at the Table Tennis County Championships held at Bromsgrove School Sports Arena. With many pupils from Year Eight participating in the weekly Table Tennis club, it was a challenging task to pick only four pupils to take part. However, Jack Whittington (Captain), Sihan Fu, Jonathan Abbotts and Lucas Jones were put forward to represent the School.

With the pandemic still posing a problem to the Sport in some schools, it turned out that only RGS Worcester and one other school had entered the Under 13 section of the competition. Stourport High School was to be the day’s competition. This meant that the school who won the most matches would go through to the Zone Finals, where they would represent the County. The format of the competition meant that each pupil would play two matches, with each match being best of 5 sets (each set first to 11 points).

The RGS Worcester Table Tennis A  team now look forward to the Zone Finals Competition in the New Year, where, if they can replicate a similar performance, will see them through to the National Finals Competition.