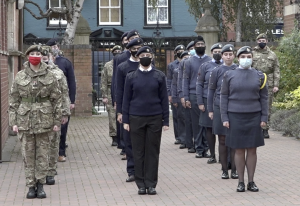 As of Tuesday 17 March, the Combined Cadet Force (CCF) was challenged to adapt, improvise and overcome the obstacles presented to the youth organisation in light of the national ‘lockdown’. Training went virtual, lessons were delivered on-line, cadets were challenged in different ways to the norm.

With schools reopening in September, and several in-depth Ministry of Defence and School risk assessments later, it was a pleasing moment to see our cadets training in person again, which was ever more important for our new recruits – no longer Year Nine cadets, but now in Year Ten. 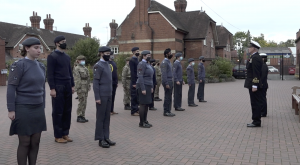 RAF cadets continued with their Part 1 training so, when cadet flying is once again allowed, our cadets will be able to take to the skies. The Royal Navy welcomed back Commander Shorrocks who kindly agreed to take over the reins of the RN Section: his enthusiasm and knowledge of all things nautical continues to amaze them. The Army Section, notably the new recruits, were able to get hands-on with the GP Cadet Rifle and begin their weapons training. The Senior cadets are currently practising for a socially distanced Remembrance Parade, where we pay our respects to those of the School community and beyond who gave their lives for this country.

The CCF Contingent continues to plan for future events in the hope that the national situation improves. To borrow a phrase from a different youth organisation “Be prepared” – we endeavour to be so.

What is LitSoc? Young Musicians Final

RGS Debaters Zoom to the Top

House Competition – it’s all still to play for