A Decade of Memories: Class of 2011 Reunion 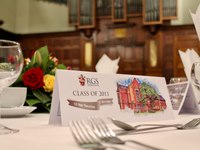 The Class of 2011 enjoyed a very memorable ten-year reunion dinner in Perrins Hall on Saturday 16 October. This event marked a long-awaited return to alumni events following the disruption caused by the Covid-19 pandemic. 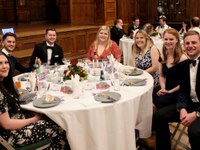 Chris Hudson was rightly credited by all present for rounding up his former classmates, who were delighted to make the pilgrimage back to their alma mater. More than fifty guests were present for the gathering, including former and current teacher Howard Groves, Phil Ehlers and Tim Hallett who really enjoyed catching up with their erstwhile charges. 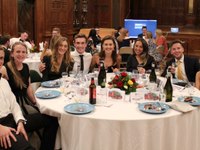 Laughter and conversation throughout the evening demonstrated just how much catching up was taking place amongst old friends. Chris helped to fill in some memory gaps by sharing material from the 2011 Leavers’ Year Book. Old quotes relating to school life, embarrassing moments and predictions made of future life paths all provided great hilarity with several of the forecasts being eerily prescient.

The Head Boy and Head Girl double act was reunited as Amelia Newland was ably assisted by Doug Wilkie working the room in a unique game of table bingo. Prizes were awarded for various life achievements, both the impressive and dubious ones. Thankfully, no one attempted to beat the Swiss Roll eating time record set in 2011 by Stewart Smith and the recounted instances of alumni ‘going viral’ since leaving RGS were amusing. 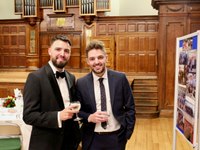 The evening drew to a close with old friends heading to old haunts in Worcester and with all declaring their love and affection for RGS. The Foundation Office thanks them for the support given and pledged to the Hardship Fund on the night and we look forward to seeing this lively cohort at future alumni events.

Forthcoming alumni events and reunions will be posted on the alumni website or for more information contact the Foundation Office on 01905 613391 or foundation@rgsw.org.uk