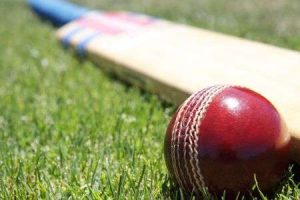 Despite the highly unusual COVID-19 circumstances the 1st XI Cricket team managed to get their cricket campaign underway this week in a fixture against an Old Boys’ XI. The conditions of this 20/20 game were unique and strange in that no spectators were allowed and the balls and players’ hands had to be sanitised every 6 overs. It was also unusual in that selection for the RGS team was limited to the Sixth Form ‘bubble’ only and as such handed first team debuts to eight individuals. Despite these restrictions, a competitive game ensued with the School putting up a good showing against a side that was very close in structure and players to the XI  team that won the RGS Schools’ Festival under James Allen’s captaincy in 2017.

The Old Boys batted first and were restricted to 123-5 mainly due to the excellent spin-bowling of the triumvirate of Ben Sutton (captaining for the third year), Ben Hallam and Dylan Griffiths. Notable contributions came from Jack Taylor, Cal Turner and James Allen. This highly achievable target did, however, seem a very long way off after Rhodri Williams’ first over in which both of the most experienced school players Ben Sutton and Jude Rees were clean bowled. This was closely followed by the dismissal of Cameron Taylor, and at 15 for 3 wickets, the chase seemed futile. However, pleasing contributions from Will Godwin, Ben Hallam and top-scorer Dylan Griffiths who on debut followed up his two wickets with 30 not out took the School to a semi-respectable total of 103 for 8 wickets thus falling 20 runs short. The School side fared well despite the fact that the sanitising rules led to a very slow over rate and the final four overs were played in the darkest of light.

Can I conclude by thanking all the players for their efforts, not only in playing past the school day at 5.00 pm but in the Old Boys’ cases nipping off early from work and travelling significant distances? Thank you to everyone for taking part and it was lovely to see Cricket return to Flagge Meadow.