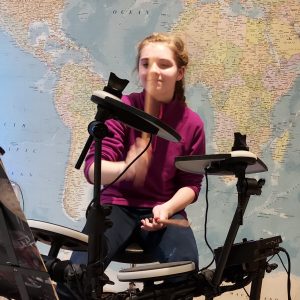 On the evening of Tuesday 16 March, it was the turn of Year Eight to take to the virtual concert platform, for their soloists’ concert. Eleven keen and talented pupils performed a good variety of well executed music. Four flautists performed: Martha Colclough opened the concert by playing James Rae’s Brain Teaser with a good sense of momentum and drive, whilst Sasha Penlington closed the concert with two movements of J S Bach’s Sonata No.6 in E major, played with style and polish. Also on the flute, Isabelle Jones played John Williams’s Hedwig’s Theme from Harry Potter and Fynn Butler performed Bryan Kelly’s Prelude Francais, both playing evocatively and freely without accompaniment. 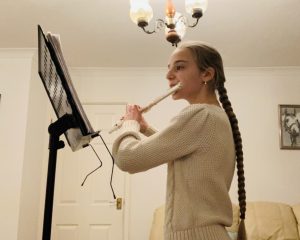 Three pupils vividly told us stories through the songs they chose to sing. Kitty Hildred became Jack (of beanstalk fame) with an assured performance of Stephen Sondheim’s Giants in the Sky from Into The Woods, whilst Kieran Lilley amused the audience with a fantastic rendition of Cole Porter’s The Tale of the Oyster. The third song came from Abigail Walter, who sang Different from Honk (by Stiles and Drewe) with sincerity and emotion. 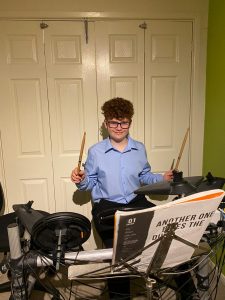 Abigail performed again later in the concert, playing Christopher Norton’s Shoehorn Blues to bring some jazz to the concert. Ben Brierley provided further jazz on the piano as he played In The Groove by Mike Cornick, capturing the swung rhythms and laid-back feel excellently. Orla Hession-Wilson treated us to the sumptuous sound of her French horn by playing Mendelssohn’s Nocturne from A Midsummer Night’s Dream, with the final two performers both confidently playing complex rhythmic parts on the drums: Dominic Chamberlain-French played Another One Bites The Dust, made famous by Queen, and AvaJeanne Bond Evans performed The Cult’s She Sells Sanctuary.

The performers all delivered beautifully on this online performance platform and it was special to be able to share their talent with large numbers of parents, teachers, family members and other friends from Year Eight with lots of positive and supportive comments coming through in the ‘chat’ function online. We thank and congratulate all of the performers.

Co-curricular Returns to RGS From Congress to RGS