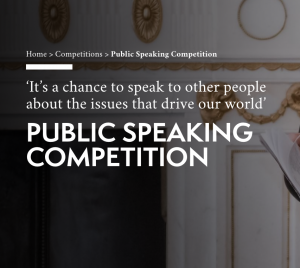 In public speaking there are three members per team: chair, speaker and questioner. The speaker works with a chair and questioner from another school. As a first time public speaker, I took the role of chairperson which basically meant that I had to introduce the speaker from Hereford Cathedral School and their topic of ‘freedom is overrated’ and run the event. At the end, I then summarised the key points that had been brought up in the speech (which is similar to the summary speaker in debating).

The teams were: Helena Stockford-Parsons, Callum Lockett and Oscar Haynes as Team One, and myself, Charlie Raven and Oscar Savory as Team Two. As the speakers, Charlie’s topic was ‘essential vaccines should be compulsory’ and Callum’s was ‘school examinations should be abolished’.

After all the speeches had been heard, we had time to talk to the other teams while the judges decided who would go through to the Regional Final. I was delighted to find that my team with Charlie as speaker and Oscar Savory as questioner had qualified!”

Congratulations to the RGS Team and good luck for the Regional Final.