In early June 2019, the UK government declared that, for only the second time since 1945, the country would officially celebrate the Allied victory over Nazi Germany, on Friday 8 May, with a public holiday. 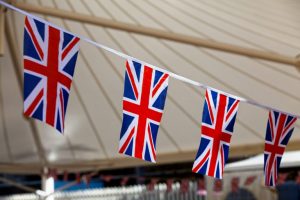 But don’t we get a public holiday on the first Monday in May, I hear you ask? Why the change, and what is VE Day anyway? Regarding the first of these questions, the UK usually declares an official public holiday on the first Monday in the first full week of May, and this has been the case since 1871, when there was a law passed to create the ‘Whit Monday Bank Holiday.’ (This was to be one of four public or ‘Bank’ holidays specified to be celebrated in England, Wales and Ireland in the Bank Holidays Act, 1871. Scotland gained an extra holiday – New Year’s Day – which the English and Welsh did not have until 1974.) The reason for the change of the Early May Bank Holiday, from Monday 4 May to Friday 8 May, is to mark the 75th anniversary of VE Day in May 1945 and to honour those who fought in the Second World War. The last time we had a designated holiday for VE Day was in 1995, on the 50th Anniversary. 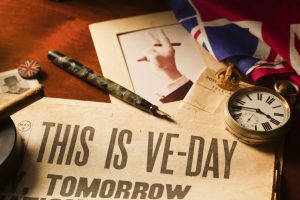 After nearly six long years of war, rationing and hardship, Winston Churchill made a radio broadcast at 3.00 pm on 8 May 1945, interrupting the BBC’s programme of that afternoon, to announce the victory over Nazi Germany, claiming “we may allow ourselves a brief period of rejoicing. Today is Victory in Europe Day.” London, and towns across the country, erupted in scenes of rejoicing. The royal family made no fewer than eight appearances at the balcony of Buckingham Palace that day before King George VI made his own radio broadcast at 9.00 pm.  Londoners came out in their tens of thousands through the day, thronging in Piccadilly Circus, Trafalgar Square and down the Mall towards Buckingham Palace. The party lasted two whole days! 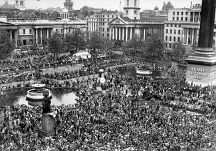 Crowds in Trafalgar Square, May 1945

The term ‘VE Day’ was first coined by the American politician and lawyer, James Byrne, in September 1944, three months after the Allied landings in Normandy.  At the time, Byrne was responsible for coordinating the American war effort and it had become clear to him, and many others, that the defeat of Nazi Germany was no longer in doubt. VE Day was to be the name given to the date of victory over Germany and is shorthand for ‘Victory in Europe Day.’ Interestingly, around the world this event is celebrated on two days; on 8 May, for those living in Western Europe or the USA, where it is called ‘V-E Day’, or on 9 May in Serbia, Israel, Belarus and Russia, where the day is called ‘Victory Day.’ The difference in the dates is due to the time zones around the world. When the final surrender of all German armed forces was signed at 11.01 pm, in Berlin, the time in Moscow was 12.01 am on 9 May. This event does not represent the end of the Second World War, however, as the Imperial Japanese armed forces continued to fight until 15 August 1945, known as VJ Day for ‘Victory over Japan.’ Even here there is potential confusion, as Japan did not formally sign the act of unconditional surrender until 2 September 1945.

Given the current situation, the plans made by the UK government to commemorate and celebrate on 8 May are on hold. A suggestion of the public holiday being moved to coincide with VJ Day, on 15 August seems the most likely and fitting date to hold national commemoration and celebration on the 75th anniversary of the end of the Second World War.