RGS was delighted to welcome (virtually) Fiona Cox, Associate Professor of French and Comparative Literature at the University of Exeter and an old girl of The Alice Ottley School. Fiona visited us last year, when she discovered the School in the middle of the hugely successful production of Les Misérables. This prompted her to offer a mini-talk on Victor Hugo’s classic and how it has been interpreted and transformed, since its publication in 1862. 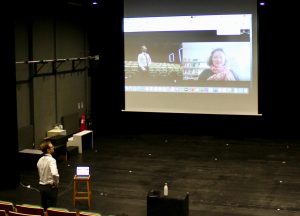 Her talk began by providing depth and context to a story that most of us know only through the stage spectacle. Fiona emphasised the work’s overtly political objectives in highlighting the fate of France’s everyman (symbolised by Jean Valjean’s very name) before moving on to the deliberately religious and classical references threaded into the novel.

The talk finished by considering a fascinating film reinterpretation of Les Misérables by a Malian-born director, Ladj Ly, who uncannily grew up in a Parisian suburb used as a backdrop in Hugo’s novel and Ly’s movie. Thank you to Fiona for offering pupils and teachers alike, a fascinating insight into this classic French novel.