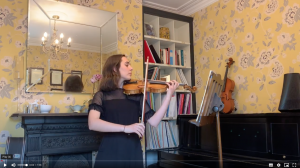 On Tuesday evening, Google Meet played host to the final Virtual Concert of the year in the form of the Sixth Form Showcase. Performers from the Lower and Upper Sixth Forms gave pre-recorded performances and the audience, keenly typing praise in the ‘chat’ function, clearly enjoyed the high-quality music-making. The concert was made all the more special as it was presented by Lower Sixth Form Music Scholars Lillian Heyburn, Isabella Hulbert, George Oates and Amelia Wood. They did a truly excellent and professional job at presenting each performer, carefully commenting on both performer and piece to lead the evening superbly. The programme was also put together by the Lower Sixth Music Scholars and we congratulate them on leading the event so well. 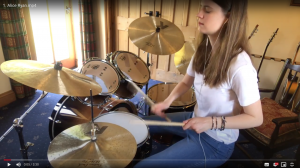 The showcase concert began with Alice Ryan’s seemingly effortless and composed drum playing as she performed Mind The Gap by Kit Morgan. There was confident piano playing by Freddie Nock, performing Respighi’s Sicilian Hunting Song, and Liam Leonard, who dazzled with Percy Grainger’s intricate showpiece Molly on the Shore. Isabella Hulbert played i) Allegro from the Sonata in D Minor by Brahms on the violin with poise and grandeur, with Amelia Wood offering more violin playing with a stylish performance of i) Largo and ii) Corrente from the Sonata No.11 by Eccles. Allison Fok’s intense and passionate ‘cello performance of Faure’s Romance in A Major, Op.69 rounded off the string playing in the concert. 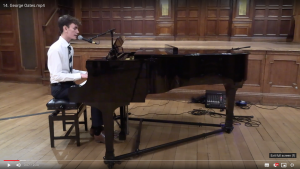 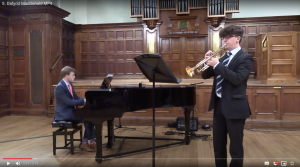 Samuel Ford played the saxophone with his usual panache in his performance of the beautiful Dreams of You by Dave McGarry, with Dafydd MacDonald delighting the audience with Haydn’s glorious ii) Andante from the Trumpet Concerto in Eb major. The concert closed with a performance of Delibes’ The Flower Duet, sung by Isabella Hulbert and Heini Hughes who have been singing this piece together for several years. This final piece offered a memorable and exceptional end to this final showcase concert for the Upper Sixth performers who, along with their Lower Sixth counterparts, we sincerely thank for a superb evening of music.