Since the start of this academic year, and my time in post at RGS, Tuesday 17 March 2020 marked out as an important date. As well as being St Patrick’s Day, this date was that of our annual RGSW Schools Choral Concert. This year, for the first time, full choirs from all four RGSW Schools were due to gather in Worcester Cathedral for a tripartite concert entitled ‘Out of Africa’. The first part of the concert would have featured individual performances from one choir from each RGS School and the third part of the evening included a mass choir (nearing 400 pupils in number) singing a selection of African-inspired choral music including pieces from ‘The Lion King’ and traditional African song. Sadly, Covid-19 necessitated that this concert was cancelled, causing much disappointment for students and staff; however, the middle section of the concert had life in it yet!

The central piece in the concert was due to be the whole of Shostakovich’s twenty-minute Piano Concerto No.2, a dazzling showpiece for piano and orchestra. An orchestra consisting of students and staff from RGS Worcester and RGS Dodderhill was to accompany Megan Wang (Upper Sixth) on the piano. When the major concert had to be postponed, we were able, at very short notice, to enlist the skills of ex-Director of Music, Mr Hamilton, who now runs the ‘Real Music Videos’ company, to make a closed concert recording of the piece. In under two hours on Tuesday afternoon, the orchestra and Megan worked in Perrins Hall and played the piece through three times, rehearsing and capturing both audio and visual recordings.

Whilst not the ‘live’ concert performance which was intended, this performance, which is currently being edited, will act as a special record of the orchestra, ably led by Isabella Hulbert (Year Eleven), and Megan’s incredible hard work this term. To tackle a whole classical concerto is a huge undertaking for any youth orchestra, let alone a school orchestra, and the students have all excelled themselves in being able to perform this piece. I congratulate them all, thank them for their amazing hard work on Tuesday and look forward to seeing, and hearing, the end result soon. 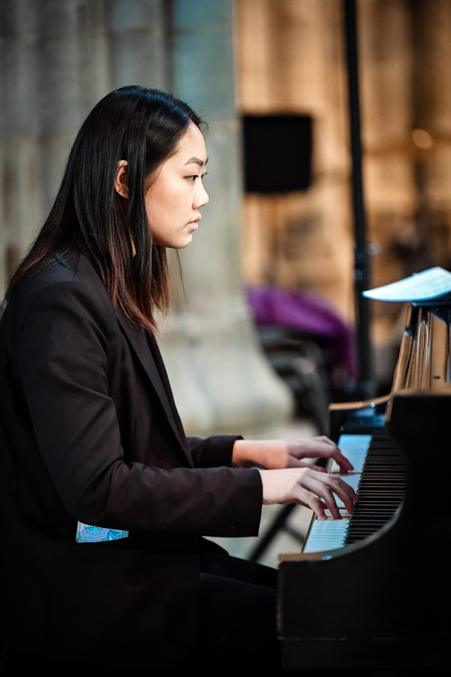