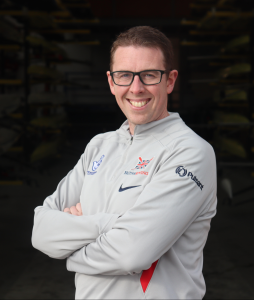 We were delighted to learn that RGS alumni, Tom Dyson (1996-03) has been awarded an MBE in the Queen’s birthday honours, for his services to Paralympic Rowing.

A keen rower whilst at RGS, Tom went to the University of Cambridge where he continued the sport alongside studying for his MA in Natural Sciences. Tom is now Head of Olympic and Paralympic Performance Delivery for British Rowing, following 14 years coaching with the Paralympic Programme. Under his guidance, there have been huge successes for Paralympics GB, with the team topping the medal table consecutively at the Rio 2016 and Tokyo 2020 Paralympic Games, with an impressive five gold medals. Tom cites the 2015 World Rowing Championships as one of his proudest achievements, coaching four Paralympic boats, all finishing in the top two positions in the competition.

Thrilled to be awarded an MBE, Tom said: “I feel extremely humbled to have been recognised for my work with Paralympic Rowing. I have thoroughly enjoyed working alongside some incredibly dedicated staff in shaping the team and it has been a privilege to coach so many talented athletes over the years.”.

Tom also remembers his Rowing days at RGS well, adding: “My final year Rowing at RGS was a very enjoyable period, training with friends who remain close to this day and learning from former teacher and coach Rob Gibson in particular. Having Rob as a coaching role model no doubt set me on the path to my current career and I greatly value his friendship, council and the yearly reunion of his RGS rowers at Henley Royal Regatta”.

To current rowers and coaches here at RGS, Tom has some final words of advice: “For me, Rowing is about people and relationships. When you invest in working together, learning from each other and enjoying each other’s company there is no limit to how far this sport can take you, both on and off the water. It has far reaching social and emotional benefits that complement the Academic requirements of both School and University. I’m incredibly privileged to have made a career from a hobby I fell in love with – I hope others at RGS will do the same in years to come.”

Congratulations to Tom for this well-deserved honour.

Celebrating Technology in ‘innovatED’ A Fantastic Year of Fencing