Leading the Way in Sport 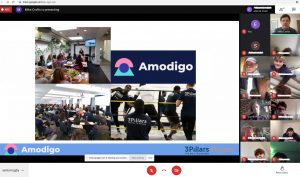 This week RGS pupils from Year Eleven to Upper Sixth had the opportunity to attend a seminar, highlighting the connection between leadership and the power of Sport. Led by Mike Crofts, founder of the 3Pillars Project, a charity that aims to support young people to forge brighter futures, and CEO of Amodigo, a training company specialising in the development of leadership skills and wellbeing programmes.

Mike spoke of his own leadership lessons with examples given from his time in Afghanistan as an Army Officer and more recently through his work using Rugby to mentor young men in prisons and young offenders’ institutions. The founding principle of his work is that the values, ethics and physical discipline used on the Rugby field and as part of a team, can engage and equip individuals with important skills that are crucial to overcoming some of life’s challenges.

During the session, pupils asked Mike some thoughtful and inspiring questions, relating the anecdotes and examples given, to their own experiences and activities.

Ellis Brindley, Head of Strength of Conditioning, commented “Mike’s discussion today was outstanding. Hearing him talk about his time in the British Army, his tours of Afghanistan, and his perspective on the things he has encountered was inspiring. He spoke brilliantly about the values of leadership and the transfer of leadership skills, as well as how these can influence the decisions we make day-to-day. He broke down the process of dealing with making decisions in volatile and pressure situations and allowing clear thought to be the foundation upon which good decisions are made. This message seemed to resonate really well with the pupils and staff as it fits perfectly with the culture that RGS Sport is trying to develop.”

Click to learn more about 3Pillars Project and Amodigo.