An International Masterclass for RGS Physicists 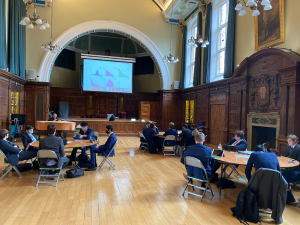 RGS Lower Sixth Physics pupils took part in an International Masterclass on Particle Physics. The event was hosted by the University of Birmingham Department of Physics and Astronomy, together with University of Cincinnati (USA), Rio de Janeiro UFRJ (Brazil), University of Bologna (Italy), Syracuse University (USA) and the European Organization for Nuclear Research at CERN (Switzerland). This was an excellent opportunity for our pupils to interact with scientists working on Nuclear Research and a variety of projects at CERN, with the opportunity to ask questions and gain insight into research. During the day access was given to real unused data collected from CERN, allowing the pupils to make measurements. This data is now included as part of the project looking at the Charm quark and its decay; real research. The day also included a virtual live tour of CERN, 100m below ground and a chance to look at the huge LHCb detector. The day finished with a Particle Physics quiz, in which Nicolas Kaye came second out of about 150 Physics students taking part from around the world – an excellent performance.

Headmaster Pens Article about Lessons of the Past, Present and for the Future Stephen Lawrence Remembered