Over the summer, a group of students travelled to France for an action-packed trip down the Ardèche River.

Mrs Bond describes the trip below:

As the end of term approached, the Ardèche trip was a much looked forward to experience, with Mr Scanlon leading an excitable and enthusiastic team of 40 students and four teachers to the waters of South France. 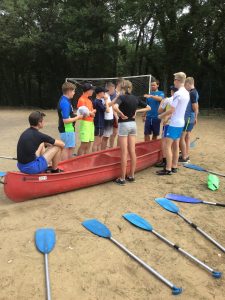 The trip began with a three day descent down the Ardèche River. Day one allowed students to acclimatise to the canoes, the river itself and, of course, the heat! In taking on over 12 rapids we were able to show off our skills on the water, though with some boats capsizing we still had lots to learn!

Day two consisted of a further paddle followed by a night bivouacking on the river side under the stars. We were very much at one with nature but the PGL staff looked after everyone brilliantly and students took part in many games both on and off the water; team work and bonding was in full swing and everyone was in high spirits.

The third day on the water was the toughest by far and RGS pupils should be incredibly proud of the final 18km paddle to the end point. Resolute, gracious, selfless and willing are certainly qualities the pupils adopted throughout the descent. 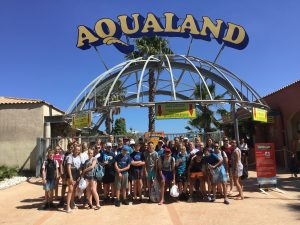 Before departing for PGL Mimosa on the Mediterranean coast, pupils had two exciting experiences: one was to visit the local town of Vallon to be immersed in French culture, this included shopping and practising conversational French. The second experience, and one of the favourites, was a half day trip to Aqualand where pupils enjoyed the opportunity to go on a number of rides as well as indulge in ice cream. This was a much needed relaxed afternoon after the tough few days on the river.

Once the group reached the Mediterranean, students were given a tour of the fantastic site and all were excited to learn of just how close we were to the beach! The next few days allowed pupils to show off how adept they were on the open water with sailing in Pico boats, kayaking, and having a go on the ‘fun boats’. Sailing was certainly a tricky skill, but pupils were energetic in their efforts and it was incredible to see so many pupils sailing confidently. 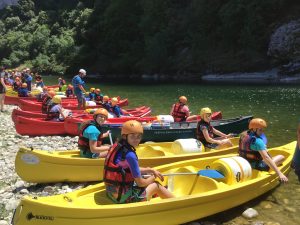 Other water activities consisted of a day at the harbour to try our hand at stand up paddle boarding (on giant boards) which was somewhat tricky to balance with up to ten students on the board at a time! This was on rotation with raft building and some excellent team building could be seen from all.

A fantastic way to celebrate the end of term and beginning of summer, the Ardèche trip was an enriching experience for all. The students certainly impressed the PGL instructors with their talent on the water but also more importantly their positive attitudes.”